The first time I saw this book was when received stock (I’m a bookseller, for those who don’t know) of the hardcover edition. Such is the situation in South Africa, however and unfortunately, that even YA novels in hardcover are a bit too pricey for our market, and so the book didn’t sell, and I had to return it to the suppliers. But I remembered the book, because the cover had caught my attention (I immediately thought ‘Waterworld’ – a movie I love); the blurb, not so much. It was a bit too vague, though I do now realize that to give a reader a longer blurb would probably have spoiled the main plot of the book. (The blurb also makes reviewing the book a tad difficult, since I run the chance of giving away more than I should.)

Months later I received an email including a press release regarding the imminent publication of the paperback from the wonderful folk at Random House in the UK, and I was offered a copy of the book to read and review; obviously I agreed. 🙂 And I’m glad I did.

X Isle is basically about finding out just what makes you who you are, finding that diamond-hard core upon which you are built, in a situation made to test everyone to their absolute limit, and the story unfolds through the experiences of Baz. He, like everyone else, is doing what they can to survive from day to day, but there’s a place that everyone aspires to reach, a place that could just prove the difference between surviving and living, and that place is X Isle.

When I talk about this novel, I describe it as Lord of the Flies for a new generation, and though that might seem a tad over-dramatic, it’s as close to answering the ‘I liked this; what can I read that’s like that?’ question.

You see, Lord of the Flies was, to me, about the relationships between kids, be they in their early teens or a bit younger or older, and it was about the capacity that every living thing, sentient or not, has to fall into violent behaviour and into a disordered state of being. And X Isle explores all of that, too.

Baz, as one of the central characters, had to sacrifice dearly to reach the promised island, and he’s focused on what he needs to do and to achieve on X Isle. He’s a curious combination of world-weary and naive, in my opinion, and these are two of his greatest strengths; these qualities place him perfectly in the spotlight as the vehicle to tell the story, and he put me in mind of one of the laws of writing fiction, which I’ll paraphrase: make sure you’ve chosen the right character to tell the story. Baz is one of those characters that will stay with me for a long while.

There are so many other memorable characters, too – characters that work with Baz and characters that work against him, and I feel that Steve managed to bring us a varied and eclectic group that is very easy to be angry with, despise, be curious about, come to respect and admire and also to believe in. I also met one of the most chillingly effective characters in the figure that owns X Isle; I’m not going to say anything about this character because I don’t want to spoil it for you. But what I will say is that Steve chose well and that, through these characters, X Isle will probably come alive for you, too.

The setting itself came across as practically a character in its own right – just because an island is surrounded by water doesn’t mean that its a place where everything is easily discoverable. The purpose that it had previously lays a certain kind of shadow, almost like a looming presence that I didn’t discover until well into the novel, and Steve’s descriptions made the island seem to me both an incredible and daunting place – exactly right for the unfolding story.

What I most want to talk about, though, are the lessons that can be learned through reading this novel. The tale is filled with themes that will resonate with many, many readers, and some of the themes still resonate with me; X Isle was one of the novels that made me think about situations in my own life and how I reacted to them, and of course about how I might react, should I find myself in the same situation. It’s the experience of reading X Isle that is so important, and I really hope that many, many people experience this novel – every one of you will take away something different from this book, something profound, I hope, it’s one of X Isle’s many strengths.

I hope this book becomes a prescribed book, even if it is only chosen by one school in one country; perceptions will change, I believe, and more ‘thinking’ will take place. At least, I hope so. 🙂

So, in conclusion, this is one of my favourite novels, YA or otherwise. I loved the characters and the setting, the self-exploration and self-discovery, and the story. It’s a damn good novel and I really feel that it should be read as widely as possible. It definitely deserves to win the Carnegie Medal, not just be nominated for it, and it’s a novel I’m recommending to everyone at the moment. It’s important, gruelling, and wonderful. 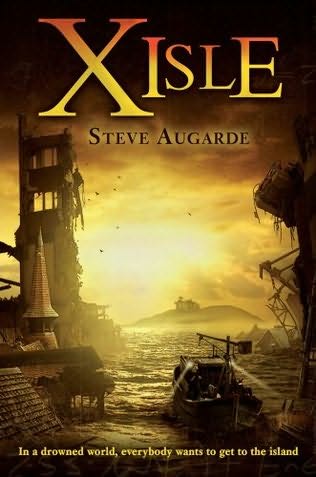 Check out Steve’s website here, and his blog here; order your copies of X Isle here (Amazon UK, Amazon US and Exclusive Books, also available as an eBook there).