Category Archives: Haven’t Read It Yet

I Haven’t Read it Yet: The Dawning of Power by Brian Rathbone

Here’s another book that I just haven’t gotten round to reading yet. 😦 Brian contacted me via Twitter wayyyy back -I’m talking only a couple of months after the blog began- and sent me a PDF copy of The Dawning of Power.

I’m still trying to get into as many of the Indie-published or small press novels I’ve been sent, so I don’t want to give any kind of time frame, but The Dawning of Power will definitely be coming up in about 4 or 5 reads.

Here’s the novel’s blurb and cover:

And here’s a booktrailer, too:

Tags: Brian Rathbone, I Haven't Read It Yet, The Dawning of Power, The World of Godsland

Haven’t Read It Yet: Resonance by AJ Scudiere

I recieved this book about 3-5 months after I started the blog, thanks to Paula Krapf from Author Marketing Experts, and I’m sorry to say that I haven’t yet had a chance to really dive into the book. I’ve read the first two chapters, just to give myself a taste of AJ’s style, and I will be getting to the book in due course, but for now, Resonance is the book that’s kicking off this new feature. 🙂

Here is the book’s blurb:

THE SHIFT IS COMING. SOON.

Dr. David Carter knows this. However, he’s a geologist, so ’soon’ means anywhere from tomorrow to a thousand years from now.

Drs. Jordan Abellard and Jillian Brookwood are standing at the edge of SuperAIDS. Or are they? They won’t be able to figure it out if they can’t get some authorization signed – and soon. But they’re peons and no one is paying attention. That means no one will notice a little forgery either, right?

Right now Dr. Becky Sorenson has some seriously mutated frogs in her lab. In L.A. Bees are making abnormal columns on the side of the freeways. In Georgia, birds are migrating out of season. It all makes a sick kind of sense when the doctors consider that the last magnetic shift is strangely coincidental to the dinosaur die-out. And the only similarity among the problems today is that each is occurring in a ‘hotspot’ – a pocket of reversed polarity that tells them all.

THE SHIFT IS ALREADY HERE.

Here’s some info about AJ:

It’s AJ’s world. A strange place where patterns jump out and catch the eye, very little is missed, and most of it can be recalled with a deep breath. It’s different from the world the rest of us inhabit, but anyone can see it – when we read. In this world, the smell of Florida takes three weeks to fully leave the senses and the air in Dallas is so thick that the planes “sink” to the runways rather than actually landing.

For AJ, texture reigns supreme. Whether it’s air or blood or virus, it can be felt and smelled. School is a privilege and two science degrees (a BA and MS) mean less than the prize of knowledge. Teaching is something done for fun (and the illusion of a regular paycheck) and is rewarding at all levels, grade school through college. AJ is no stranger to awards and national recognition for outstanding work as a teacher, trainer and curriculum writer.

AJ has lived in Florida and Los Angeles among a handful of other places. Recent whims have brought the dark writer to Tennessee, where home is a deceptively normal looking neighborhood just outside Nashville.

And finally, here’s the novel’s cover-art: 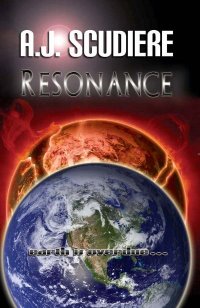 To order this book, click here for Amazon US; Head on over to AJ’s website – Resonance is also available as an Audio Movie (the details of which you can check out at the website).

And here’s a further bonus for you all – the book trailer of Resonance!