I don’t think I have ever been this excited to see a ‘horror’ movie before and man was it a disappointment. 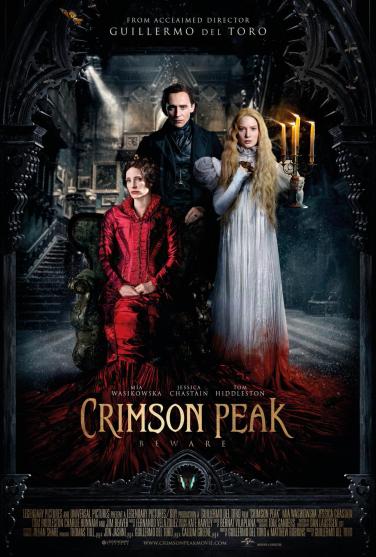 Judging by the trailer, this film was going to be a campy, Gothic horror-fest complete with a haunted house on the bleak British moors and buckets of faux-blood. Actually, I was most excited for this film because it didn’t look all that terrifying (I’m a total wimp when it comes to horror) but looked more Gothic and grotesque, which I adore! So, off to the cinema I went.

Firstly, I remember now why I stopped going to the cinema and would rather wait for films to come out on DVD/streaming-sites. The inconsiderate asses behind me talked non-stop and even took photos of their popcorn (I just can’t even!!) with flash during the freaking movie!! My irritation at the selfish imbeciles behind me no doubt eroded some of the pleasure I might’ve derived from the film.

That said, it took almost an hour’s worth of two-hour run time to even get to the titular Crimson Peak! I thought the entire film was set in this rotting estate replete with bleeding walls, but nope, first we had to endure a bunch of back-story and long-winded set-up. By the time we got to the blood-soaked house, I was almost bored despite the charming good-looks and distinguished awesomeness that is Tom Hiddleston when he plays aristocratic British characters.

Now the house itself was spectacular and well-worth the wait, but what I thought was blood from the trailer was in fact red clay and iron ore leaching into the ground and turning it red – somewhat anti-climactic. And the horror of the house, combined with the appropriately unexpected frights courtesy of ghosts so grotesque they were more humorous than frightening, was pretty much all this film had going for it. I expected a lot from the story. I expected the house to be more, I actually expected it to be sentient. I expected the siblings to have a lot more going on in their past than an almost justified murder of a cruel mother and illicit love affair. Siblings falling in love is no longer as shocking as it used to be. Blame the Lannisters maybe, but this revelation wasn’t a revelation at all and the sort-of love scene between Tom and Lucille was barely a love scene at all, so the whole thing just fell flat for me. The only part of this story that horrified me was that Lucille murdered their mother at 14 when the mother found out her children were lovers. When Lucille was 14, her brother was 12. And they were lovers. People, THAT’S the true horror story!

Despite the underwhelming plot and predictability of the scares, the acting was on point for this penny dreadful-esque story and the cinematography was spectacular. Seriously, I would watch this film again (the second half) just to ogle the scenery and that delightfully dilapidated house.

Perhaps I went into this with my expectations far too high. I may or may not have confused Guillermo del Toro with Terry Gilliam, and when you go into a film thinking Brazil and Tideland only to be met with the guy who did Pacific Rim, well, it was my own fault really. That said, it was still reasonably enjoyable, although I don’t think this will give horror fans the frights they want, and won’t be nearly sinister enough to satisfy Gothic fiction lovers. Basically, Crimson Peak is little more than a flirtation with the macabre that’ll keep yours eyes entertained while you chew on popcorn. A disappointing 2.5/5 ink splats for this.

Posted by suzannevanrooyen14 on October 20, 2015 in Reviews, Video Reviews

I’m a total sucker for vampires (no pun intended) especially when they involve the King of Blood-drinkers, Lord Dracula. Despite my better judgement, I have often found myself watching movies I know are going to be terrible because they’re about my favourite monsters. As soon as I heard about this film, it was a foregone conclusion that I would eventually end up watching it because a) vampires b) The Bard from The Hobbit and c) Vlad Tsepes, better known as Dracula. So, I finally got to see this movie and here are my thoughts about it.

*Mild spoilers ahead. You’ve been warned* 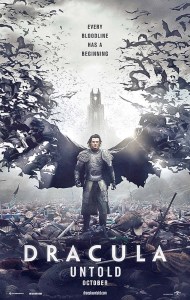 The trailer gave me chills – most probably thanks to that incredibly cool song by Lorde – but also because it seemed to give Dracula a more heroic role instead of having him in skulking in the shadows. I was really excited to see Dracula some into his own and be unapologetic for being a badass. Having scene the film and rewatching the trailer, I’m disappointed because there are scenes and details shown in the trailer that just don’t appear in the film. Other than that, the trailer also shows some of the coolest parts of the movie – typical – thus rendering the actual film experience somewhat anti-climactic.

Now onto the film itself. Of course, it starts off with a voice over and cinematography that seems heavily influenced by Zack Snyder, ala 300 style, only somewhat less impressive. Considering this is the director’s first feature film (according to IMDB) he still did a fairly decent job and I found the film rather pleasing to the eye, if utterly predictable. The predictability of this film might be because I’m overly familiar with these tropes as a writer myself or might be because just about every super-hero and monster movie has employed a variation of these ideas in recent times. Aside from the voice over, my biggest peeve with this film is the glaring historical inaccuracies. I’m married to a Transylvanian, I have been to Romania, and have been to the real Castle Bran (the legendary Dracula castle that is more fortress than Disney.) With every iteration of the Dracula story that gives the monster-legend a historical context – like this film tries to – I always hold out vain hope that they’ll get it right. While this film does build upon a foundation of fact – yes, Romanian children were given to the Turks and used as child soldiers – the history is so watered down and over-simplified. Basically, it gets the Hollywood treatment, and so does our anti-hero Dracula. Can’t have a hero being too evil, now can we?

Dracula in this film is a man with an inner darkness – pretty much Vlad’s penchant for impaling his enemies – and turns to even darker means (does it get any darker than Tywin Lannister?? Charles Dance is in this!) in order to save his immediate family from the Turkish threat. We are repeatedly told about the darkness within Vlad without really being shown it – feeling nothing about how much blood you shed on a battlefield isn’t the same as being a sadistic bastard who revels in eviscerating children, and that’s what I wanted, a film so much darker and scarier than this. Most of the time I wanted to give the guy a hug and tell him everything would be all right, not run screaming in fear. Also, they gave Vlad some pretty awesome superpowers, which he then absolutely squanders and seems to spend more time sulking than kicking Turkish butt. Several times I wanted to reach into the screen and slap him upside the head for wasting time. The climax of this film could’ve been averted had Dracula not dilly-dallied for no apparent reason. Sigh. I guess they needed to manufacture the tension somehow so the anti-hero could reluctantly step-in and save the day by doing the wrong thing for the right reasons.

I saw the ending coming a mile away and predicted the outcome almost exactly for the historical part of the film. Then something unexpected and pretty amazing happens, and the last few minutes of the film are definitely the best, giving me hope for what might come next in this franchise, if a sequel ever gets the green light.

In short, if you’re looking for the Gothic romance of blood-drinking and velvet-clad vampires, you’re better off watching Bram Stoker’s Dracula or Interview with a Vampire. If you’re looking for a more historical take on the vampire legend then you’re definitely better off watching Dark Prince (a criminally underrated series about Vlad Tsepes – still taking liberties with the facts though), and if you want swashbuckling, monster-fighting adventure, you’re probably better off watching Van Helsing. Given the slew of vampire movies and an abundance of those dealing with Stoker’s villain, Dracula Untold simply doesn’t bring anything new or exciting to the table. While it isn’t a terrible way to spend 92 minutes (there are some fun scenes, there’s also some artistic camera work, and did I mention the Luke Evans eye-candy?), I think the film would’ve been far more interesting had it started where it ends. 2.5/5 ink splats from me.

Posted by suzannevanrooyen14 on March 10, 2015 in Reviews, Video Reviews

Yep, FINALLY, I hear you say! 😉 No worries – I know I’ve been away for a while, but I’ve figured out a way to be able to review the books I’ve read while keeping up the pace of the writing of my second novel – and this is it! 🙂

In part one of my new Video Review series, I take a look at Joe Hill’s ‘NOS4R2’ and Kate Griffin’s ‘The Midnight Mayor’ – links after the vid!

There we go, hope you’ve enjoyed the video – this will be how I’ll be doing things from now on, so look for my next review-video next week. 🙂

Until then, and as always,