A review of NIGHT WITCHES by L. J. Adlington

Hi everyone, I’m new to the blog *waves* Thank you Dave for inviting me over to review some super cool speculative fiction. I’ll mostly be reviewing YA books, but I’ll also review the odd film or two. I have a quirky taste in books and films so I hope my reviews will introduce you to lesser known but no less awesome SF/F stories.

About me in a nutshell:

My name is Suzanne and I’m a tattooed story-teller from South Africa, but I currently live in Finland where I hibernate during the long winters writing, reading and watching everything under the speculative fiction banner – except horror, because I’m a wuss. I have a peanut butter addiction and a shibu inu called Lego. You can find out more about me and my books at my website. And instead of giving you a picture of my face, I thought I’d show you the cover of my forthcoming YA novel, I HEART ROBOT, because this cover is so much prettier 😉

And now for the review… 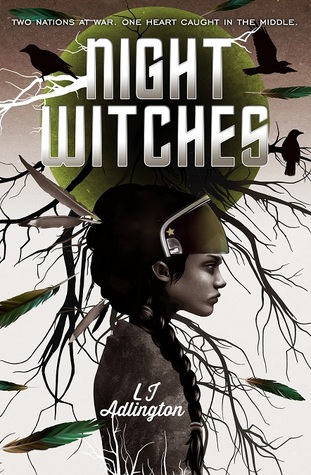 TWO NATIONS AT WAR. ONE GIRL CAUGHT IN THE MIDDLE. Rain Aranoza is a teenage bomber-pilot from Rodina, a nation of science and fact ruled by the all knowing Aura, where the belief in witches or any type of superstition is outlawed. Rain’s regiment is made up of only teenage girls and their role is vital to the war effort against the Crux, a nation of faith and belief, where nature and God are celebrated and worshipped.

But Rain is struggling with another battle. She’s always had a sense that her nature is different from everyone else’s, and that a dormant power threatens to burst out of her.

When she encounters a young Scrutiner she falls in love with him, but is torn between what she has been taught is right, and what feels right. As her understanding of her latent power grows, the enemy threatens both her friends and her love. She can no longer ignore the power but she must choose how she uses it … But what will she lose in the process?

When I reached the end of this novel, four words came to mind: Brilliant! Amazing! Original! Enthralling!

To be honest, I didn’t know what to expect when I picked this up at the library. The cover immediately caught my attention (hooray for a person of colour being on the cover!) and then that blurb. Teenage bomber pilots? Sign me up! This book was astonishingly good, the perfect blend of science and fantasy starring a sympathetic MC who I adored. That said, it was the secondary characters who stole the show here, and one of the secondary characters was even genderqueer.

This book scored lots of points for diversity. What really had me captivated though wasn’t the MC, or the cool planes, or the love interest with tattooed eyelids (creepy and awesome), but rather the world. The author weaves a rich tapestry that pits religion against science, humanity against artificial intelligence, and nature against machine using appropriate vocabulary and teenage slang born from the fantastic world the characters live in. This all added a most authentic feel to the book and had me fully immersed in the story world from cover to cover.

What sealed the 5 ink splat deal for me was finding out this story was inspired by the real night witches: all-female fighter pilots from the Soviet Union who became a rather formidable force during WWII. The fact that this bit of history is woven into the story, including thematic material gleaned from Stalinist philosophy, added an extra dimension to the book, one which I found fascinating and terrifying, especially considering the YA demographic for which this book is intended. It was a brave move by the author and one she executed flawlessly.

I strongly recommend this book to anyone looking for a strong YA science fantasy featuring diverse characters in an incredibly well-constructed world. This book gets 5/5 ink-splats from me! Right, I’m off to find more books by this author.

Posted by suzannevanrooyen14 on October 7, 2014 in Guest Reviews, Reviews, Uncategorized