Man, what a day for news!

Let’s get right into it; first off, I’ll show you the cover to Sean William’s Star Wars: The Old Republic novel, Fatal Alliance: 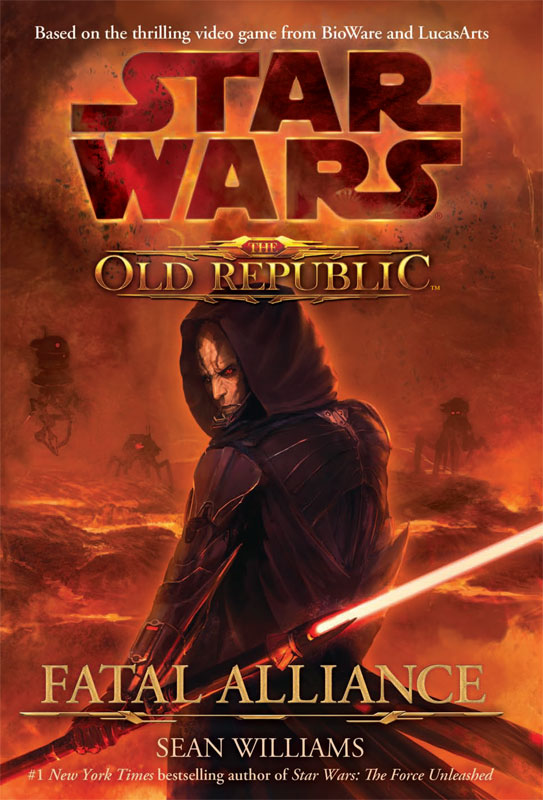 Awesome, right? Check out the details for the novel at this post on the official site.

Sean is not only an awesome guy but knows what makes Star Wars so great and brings it in droves to the novels he writes in the Expanded Universe, so I’m definitely looking forward to this!

Next up, the long-awaited naming and cover-reveal of The Old Republic novel by Paul Kemp; I’ll let the cover do the talking! 🙂

Awesome, right? 😀 And yes, that is the kickass Sith Lord who we saw in action in the cinematic of The Old Republic. 🙂 Check out the details of the novel at this post at the official site; if you want to have another look at the cinematic, check out this post at Paul’s blog, and here’s his announcement. 🙂

Very, very chuffed for Paul that he got the chance to write a novel focusing on such a badass character! Here’s hoping that the story behind the cinematic is also included in the novel! 🙂 He’s already sent in the first draft of the novel, so everything looks a-okay for the December release date!

Paul’s Crosscurrent (reviewed here) showed that he has an awesome understanding of Star Wars, so this will, most probably, be awesome. 🙂

Now for Wheel of Time news!

Check out this post over at A Dribble of Ink; Aidan gives us an extended blurb of Book Thirteen of The Wheel of Time, Towers of Midnight. If you haven’t read it yet, I’ll say this: Perrin and Mat.

And lastly, news of the Dark Tower movies!

Thanks to my buddy Lood, I can tell you that Ron Howard has been tapped to direct a trilogy that’ll bring Stephen King’s absolutely massive and brilliant series to the big screen. Just how he’s planning to cram 7 novels-worth of plot into three movies I have no idea, but this is Ron Howard, and I’m sure he’ll do movies that’ll be as true as possible to the King’s epic. 🙂 Check out the info here.

That’s it for now,

Have an awesome weekend!

P.S. Oh, and here’s something you all have been drooling for – the first pic of Thor. 🙂

Posted by Dave de Burgh on April 30, 2010 in Announcements

This was originally posted over at Realms & Galaxies: Celebrating SFF on the 27th of November 2009.

Now, I hope most of you have read Under the Dome and have given yourselves over to a King-fest (I know I would like to!), but if you’ve read of Stephen King’s work and are starved for new material, you’ll have to still wait a bit. 🙂

The King has announced one project, and the web is a-buzz with rumors of another – the projects being a return to the worlds of The Dark Tower and a sequel to The Shining.

The King has said that he’ll be writing either a novel or a series of interlinked stories set between Volume 4: Wizard and Glass, and Volume 5: Wolves of the Calla, and that these stories (or the novel) will have the title The Wind Through the Keyhole. There has been much debate on this, with some saying, basically, Leave It Alone, and others foaming at the mouths for more Dark Tower material; I’m of the latter – The Dark Tower saga is such an incredible tale that I would love another addition to it – goodness knows that the worlds King created for the series (worlds which link to his body of work in many ways) have almost limitless tales waiting to be told! 🙂 (Thanks to Piotr for the info!)

I’ll keep you updated on news concerning The Wind Through the Keyhole, though, 🙂

Now, concerning a sequel to The Shining, King hasn’t yet decided whether to actually write the book or not. The story might focus on Danny, he who has the Shine, as a 40-year old, and might be titled Doctor Sleep. It’ll be interesting to see in which direction King takes the character and events, and I for one am, of course, itching to read it! 🙂 (Thanks to Lood for the info!)

What do you think? Return to the Dark Tower or write a sequel to The Shining or both?

Posted by Dave de Burgh on January 1, 2010 in Announcements

Tags: Stephen King, The Dark Tower, The Shining, The Wind Through the Keyhole