Spotlight and Excerpt: We Call It Monster by Lachlan Walters (Severed Press)

A story-cycle/novel-in-stories, We Call It Monster is written in a grounded and realistic way, with each chapter unfolding from the perspective of a different character, and detailing his or her first-hand experience of the conflict between humans and monsters.

Hey everyone, hope you’re all well and that you enjoyed your weekend! I’m back with another spotlight for a book that should be on your radar – and what a cover!

Here’s some info about the book:

One ordinary day, an enormous creature dragged itself out of the ocean and laid waste to a city. In the months and years that followed, more and more creatures appeared until not a single country remained untouched. At first, people tried to fight them. In the end, all they could do was try and stay alive.

We Call It Monster is a story of forces beyond our control, and of immense and impossible creatures that make plain how small we really are. It is the story of our fight for survival and our discovery of that which truly matters: community and compassion, love and family, hope and faith.

Here’s the excerpt from ‘We Call It Monster‘:

The old man shuffled out to the balcony, dusted off an outdoor chair and then made himself comfortable. The sky was a shade of blue that painters only dream about; it was a beautiful sight. The old man drank it in, leaning back in his chair. He sipped at his coffee and smoked a cigarette. He was happy to wait as long as was necessary – he had all the time in the world and he wasn’t going anywhere.

The monster finally appeared, a blurry smudge in the distance.

It was enormous and ridiculous in equal measure. The old man was surprised to find that it failed to frighten him.

It drew closer to the city. It stopped suddenly and bit a great chunk out of a stately old tree lining a boulevard. Chewing slowly and methodically, it worked its way through the mass of wood and foliage before throwing its head back and opening its mouth wide. Despite his deafness, the old man felt the monster’s keening in his bones and in the pit of his stomach.

He pulled his hearing aid from his pocket, turned it on then slipped it in place.

The beast’s cry was low and mournful, more a melancholy bellow than a ferocious roar. Thankfully, the klaxon-blare of the evacuation alarms had stopped. The monster cried out again and it shook the old man, both literally and metaphorically. The beast shifted its legs, presumably adjusting its weight, and destroyed an office building in the process.

Almost comically, it looked down at the destruction it had wrought and seemed to shake its head.

It looked back up and cried out a third time, and then started walking again. It seemed to meet the old man’s eye. Without breaking its gaze, the old man took another sip of coffee before lighting another cigarette.

Slowly-slowly-slowly, the monster drew closer. You could almost see a smile on the old man’s face.

The novel was written by Lachlan Walter, and I’m looking forward to reading this because I really enjoyed ‘The Rain Never Came‘, and this looks absolutely epic! The books is available for your Kindle and as a print-edition.

Here’s some info about Lachlan: 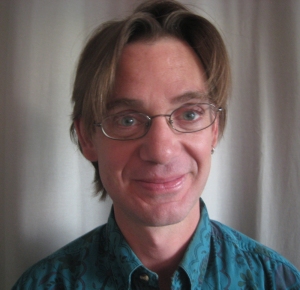 Lachlan Walter is a writer, science-fiction critic and nursery-hand (the garden kind, not the baby kind), and is the author of two books: the deeply Australian post-apocalyptic tale The Rain Never Came, and the giant-monster story-cycle We Call It Monster. He also writes science fiction criticism for Aurealis magazine and reviews for the independent ‘weird music’ website Cyclic Defrost, his short fiction can be found floating around online, and he has completed a PhD that critically and creatively explored the relationship between Australian post-apocalyptic fiction and Australian notions of national identity.

He loves all things music-related, the Australian environment, overlooked genres and playing in the garden. He hopes that you’re having a nice day.

You can connect with Lachlan on Facebook and Twitter, and don’t forget to check out his site and the web-home of Severed Press.

That’s it for now, and until next time…

Posted by Dave de Burgh on April 1, 2019 in Excerpt, Spotlight

Hey everyone, hope you’re all well. 🙂

Lachlan has been waiting a long while for this review, so let’s get into it, shall we?

This novel is categorized as falling into the Dystopian genre, and I’m happy to report that it features none of the teenage angst which that genre is known for. This is a lyrical, thoughtful, often brutal, honest and surprisingly moving novel which doesn’t comfortably fall into any specific genre, though I do understand the Dystopian classification, since the tale takes place in a world which is slowly dying due to climate change.

In this dying Australia, rain is even more scarce than good people and good intentions – there are those who struggle daily to hold to the kinds of lives they led before the climate calamity settled in to stay, even though there are very necessary changes to their routines and their way of life; but they remain good, conscientious people, who continue to look out for each other. And there are those who either live on the fringes, scavenging, and other who seek to control what they feel they must control – because who else will?

The main character is one of the ‘good guys’, despite what he’s been through and experienced. He spends most of his time at the local, barely-standing pub, and is part of small, hard-working community. Life isn’t easy, but folks get on with it. There’s a stoicism to these people which compliments the world around them – they have become a product of their surroundings and have learned the best ways to survive and enjoy their lives, as and when they can.

Lachlan spends a bit of time ushering us into this more-than-usually arid Australian outback, showing us the place the varied cast of characters call home and revealing their relationships to each other. A vague sense of distant danger swirls around every conversation, and when the MC, Bill, is convinced to help out his friend, Tobe, the story builds to a new pace, and the sense of distant danger gives way to a constant sizzle of dread. Bill and Tobe aren’t entirely sure what to be scared of. But it’s revealed in increments as the landscape, the heat and dust, the ever-present thirst the characters struggle with and the fate they’re moving towards spiral closer together.

This is the kind of novel that doesn’t need awesome battles, flashy tech or detailed science to make it sing – it’s a brooding read, the kind of book that lulls the reader while quietly building strength toward an abrupt -yet fitting- end. ‘The Rain Never Came‘ also showcases Lachlan’s storyteller’s talent, and he’s definitely a writer who should be on your radar.

To order your copies of ‘The Rain Never Came‘, click here to head over to the publisher’s site, and here for Amazon. You can also add the book to your Goodreads shelf, and do check out Lachlan’s website.