I apologize for the delay, Folks, some stuff came up that put a couple of potholes in my road, but I’m finally back to announce the winner of the giveaway. 🙂

The lucky winner will receive a hardcover copy Pure, which I’ll be mailing out tomorrow. 🙂 If you haven’t yet read the book, please do – it’s a wonderful and -in places- creepy read, and I’m definitely looking forward to book 2, Fuse. 🙂

Anyway, let’s get to announcing the winner! Not a lot of entries by any stretch, but I blame that on the SA-only caveat to the giveaway. Not to worry, though – gotta make sure SA readers also get the chance to win free books, eh? 🙂

And the winner, as picked by Random.org, is….!

Congrats, Varla, the book will be on its way to you shortly. 🙂

Thanks to all the other entrants, you’ll get another chance to win a free book soon, so keep an eye on the blog! And a BIG thank you to the great folks at Headline for supplying me with an awesome hardcover of Pure for the giveaway, much appreciated! 🙂

Posted by Dave de Burgh on August 1, 2012 in Giveaways

Even though I read this novel a couple of months ago it still sticks in my mind – it’s that kind of mingling of characters, descriptions, situations and the emotions they evoke that is truly memorable, and I thought I’d state that first, since there aren’t many novels out there that remain truly memorable, and those that do are elevated to a higher class of novel.

Pure follows the stories of two characters; one of them lives in a world that has been over the brink – she scratches a living from the burned-out and shattered remnants of a society and civilization she barely remembers, while the other (a Pure) lives a life of ritual, routine and, above all, safety. His is a world in which he doesn’t have to worry about shelter and food, but there are other things that come to represent threats against his life and all he’s known.

As the novel progresses these two characters move closer and closer to meeting each other, and their respective worlds emerge, promising that the ‘clash’ when the two meet will be something profound – and it is. It’s a clash of philosophies, outlooks, judgments, even memories, and no-one involved is left unscathed. But it’s also a clash of worlds, since the two central characters live in worlds that are so incredibly different.
As far as the ‘world’ of this novel goes, it’s an interesting and terrifying place. The people who are not Pure live with daily dangers that make day-to-day survival a fraught experience. Most have been marked and changed –and not only mentally and emotionally- by the events that destroyed civilization, and some of the physical changes are truly strange and weird. The thing I liked most about this was that there was no definite purpose go the changes – there’s nothing of ‘this change helped this person be faster or stronger’ etc. and that brought a great degree of randomness to the people in the tale. Others, of course, become incredibly dangerous because of the changes, but I’ll let you discover that on your own. 🙂

Focusing on the characters we’ve got two people from different backgrounds who believe different things; the one thing they have in common is the world they used to live in, and even this is commonality is subject to different memories and ideas. Both of them grow and change as the novel progresses, and both journeys were important – that’s to say, one didn’t seem more important than the other, there was no ‘lead’ character in this tale. Because of that I found myself constantly curious as to what would happen to them, there was no skipping scenes or chapters to get to the character I most wanted to read about because both were equally great and interesting.

The writing flows beautifully although there’s always an undercurrent of danger and sadness, and the descriptions never overwhelmed. I can totally understand why Justin Cronin loved this novel, and, I have to admit, his love of the novel was the main reason why I read this book. I can safely say that I’ll always trust his judgement. 🙂

Pure is the first novel in a trilogy but there’s an ‘ending’ to the novel, a closing of circles, that was satisfying and also managed to leave me curious in certain aspects; Julianna doesn’t tell us everything, which I’m grateful for, since that means there’s plenty more she can do in the next two books to further flesh out and fill this world that she’s created. But the point that the two characters reach is an ending – no cliffhangers here. 🙂

All in all, Pure was a wonderful read, showing both the darker aspects of human nature and the best, and plays with the ‘greater good’ idea to an extent that I couldn’t really decide on which side of the fence I fell. Also, memory and our perception of it was also used in this novel and is one of the most important aspects of it. I highly recommend Pure to anyone who likes character-driven fiction in which the questions and the journey are not as important as the answers and the destination. It’s a great, heartfelt tale against a beautifully sad backdrop and I’m definitely looking forward to the rest of the trilogy. 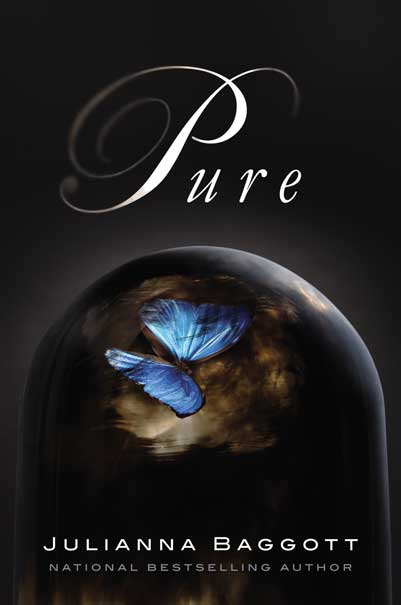 And for those readers in South Africa who would like to try their luck, I’m running a giveaway for one hardcover copy of Pure, thanks to Julianna and her publishers. 🙂 To enter, all you have to do is leave your name in the comments-section below. I’ll run the giveaway from today (11 July 2012) until 25 July 2012, with the winner drawn and announced on the 26th. I’ll choose the winner via Random.org on that day. Please, entrants from South Africa only – the postage is an absolute killer elsewise!

Until next time,
Be EPIC!

P.S. For those who have already read and loved Pure, the second book in the trilogy, Fuse, will be out Feb next year – so make the late March for us readers here in SA. 🙂