I started reading this novel after I watched Predators. The movie impressed me, taking the Predator back to its hunting roots, and then I rewatched Predator (Schwarzenegger) and Predator 2; yes, AvP 1 and Avp 2, as well… 😉 I found myself thinking about the movies and the Predator all over again – its technology, what it looks like (skin, armour, face), the way it moves, the way it growls and snarls. It’s always been my favourite alien and watching these movies again just reinforced that. So I tucked into South China Sea, hoping that I would find the same things that originally drew me to the alien hunter…

And let me tell you, Jeff doesn’t disappoint!

The very first aspect of the novel that drew me in was Jeff’s ability to introduce characters that instantly made me curious, and to make those characters unique and intriguing; the novel has a big cast (read the book’s blurb and you’ll see what I mean) and I was hoping that the POV jumping wouldn’t negatively affect the plot – it’s damn difficult to write even one character, and giving life to a large cast is insanely difficult. But Jeff proved my fears unfounded. Each character has a back-story -sometimes not a nice story to experience, but always interesting- with some characters getting more of a focus than others; this technique (or perhaps I should say, ‘Demand of the Story’) kept me guessing, and led to many surprises. 🙂 I experienced plenty with this cast – mind-numbing fear, an incremental fall into madness, an almost inhuman focus, hysteria and sadness… And also not from the characters you would expect! This juggling was masterful, showcasing Jeff’s talent of using that most important story-telling vehicle: the character.

Jeff also knows how to do action! There are plenty of scenes that really widen the eyes – a hectic scene involving a rhino, gun battles, even extremely tense discussions. Practically every page of this novel is laced with passages and sentences that not only kept me flipping the pages but kept my eyes moving at a feverish pace. And yes, I winced too many times to count. The most awesome set-piece was a massive battle at the end of the novel – the tactics alone involved in this scene were excellent, but there’s so much more in the scene -and throughout the novel – that had me set on the path of reading more of Jeff’s work. He’s got a particular way of writing action scenes, putting you right there to feel the blood-spray and the struggle not to vent your bladder! (or something smellier…)

My favourite aspect of this novel? The Predator is a hunter once more. I’m sure that most people see the Predator species as cool, ruthless rasta-ET’s who have awesome ways of dealing death, but what they represent has been lost through the years, even in some of the comics (I’m reading Predator: Cold War now, and hunting just doesn’t seem to factor into the storyline). Jeff steers the alien hunter back to its roots, an awesomely so. I got the sense that the creature was on an actual hunt, and that it was actively thinking about how to take down its prey; it employed actual tactics, set traps, etc. None of this got lost in the story, either. And this task must have been damned difficult – how do you write POV scenes from the point of view of a being that we know next to nothing about? Ask Jeff, ’cause in my opinion, he pulled it off, and awesomely so. 🙂

There’s so much else going on in this novel that I could talk about, but I’ll leave that to the readers after me – suffice it to say that South China sea would kick every Predator-movie’s ass for plot, characters, action and focus. Not only was this an awesome, thrilling book about the most badass alien out there, but it was also a book that got me hooked on Jeff’s style and talent. If you want to re-capture that sense of ‘holy shit, this thing is fucking awesome!’ you may had after the first Predator movie, read this novel. 🙂

My only niggle about this book is that one of the Predator’s weapons was just a bit too much – overkill, in fact. It’s not a weapon I’ve seen a Predator use before (well, you know what I mean) and I was confused at first when I read the scene in which it was used. It’s probably just me, but it seemed a bit ‘out of character’ for a Predator to use such a weapon.

Barring the above, the novel is awesome; full of action, gore, thrilling set-pieces, one of the most amazing human-against-Predator duals I’ve ever experienced, and a definite talent at creating believeable, interesting and attention-grabbing characters. If you’re a Predator fan, read this book, and I’m pretty sure you’ll agree. 🙂 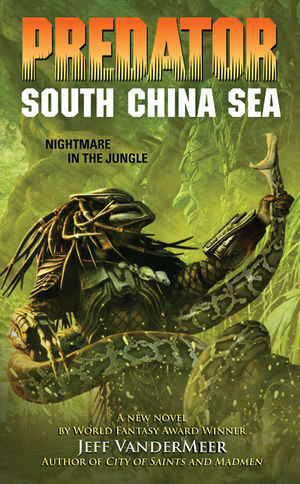 And you don’t have to take my word for it – Graeme reviewed South China Sea last week. 🙂

For more info on Jeff and his work (Finch will be the next title from him that I’ll be reading), head over to his website; to order the book, click here for Amazon UK, and here for Amazon US.