Hey everyone, I hope you’re all well and having a great week so far. 🙂

Today I’m participating in a multi-blog tour to promote a new Horror novel published by Titan Books, and I’ve got an excerpt for you!

Fleeing from a traumatic break-in, Londoners Paul and Tricia Feenan sell up to escape to the isolated Holiwell village where Tricia has inherited a property. Scattered throughout the settlement are centuries-old stones used during the Great Plague as boundary markers. No plague-sufferer was permitted to pass them and enter the village. The plague diminished, and the village survived unscathed, but since then each year the village trustees have insisted on an ancient ceremony to renew the village boundaries, until a misguided act by the Feenans’ son then reminds the village that there is a reason traditions have been rigidly stuck to, and that all acts of betrayal, even those committed centuries ago, have consequences…

I’ve got this coming up soon to read and review, and I’m really looking forward to it! But without further ado, here’s that excerpt:

Toby jerked awake with a cry. For a moment he couldn’t remember where he was. There was no familiar street light here or sound of traffic on the busy road outside. It was altogether too dark, too quiet. His phone had just fallen to the floor, uplighting the room and pulling the shadows high towards the odd-angled ceiling in skewed perspectives. He checked the time: 1:43.

Obviously there was nobody sitting at his bureau. Just another intruder nightmare brought about by staying up too late on his phone. Nothing to see here, folks, move along. All the same, he got up and went to the window just to be sure, listening to the strange new creaks of the floor under his feet, wondering how long before they became familiar, before this place would feel like home. This place is safe. It’s protected, they’d said, but they’d lied.

Because there was someone in the back garden.

A girl, he was fairly certain of that, from the slightness of her figure, the shift-type dress that she wore, and her long hair. Beyond that he couldn’t tell much because of the darkness that left her face in shadow, but her pale arms looked somehow blotchy. She was standing in the middle of the lawn, right by the parish stone.

She wasn’t doing anything, just standing there. It occurred to him that she might be a junkie, either looking for something to steal or simply too high to notice where she was, although he couldn’t imagine how she’d got in because the back gate was firmly locked; she’d have had to climb the fence and she didn’t look strong enough for that. In fact, given that it was still only April and had been raining all day, he wouldn’t have been surprised to find that she’d caught her death of cold. She didn’t look dangerous. For a moment he wondered whether he should get his parents to call an ambulance or something – maybe that shift thing was a hospital gown. Maybe he should let her in for some warmth and shelter.

‘Some have entertained angels without knowing it,’ he murmured.

The girl’s head snapped up, staring straight at his window. Her face was still in shadow but now there was the glitter of eyes deep in sunken sockets.

Staring straight at him.

He yelped and fell back. It was impossible that she could have seen him – almost as impossible as her being there in the first place.

Warily, he approached the window again, expecting to find the garden empty.

She was still there, still staring. However, the ground around her was busy now with small, dark shapes, tumbling about her bare feet as if playing. Rats. The sound of their chittering reached him clearly.

She raised her arm, and beckoned to him.

There we go, a nice little surge of gooseflesh for you! 😉

You can order your copies of The Plague Stones at the following links: Amazon UK and Amazon US, You can also head over to James’ blog for more info on him and his work, and below are all the blogs / sites that have already participated in the tour and the stops coming up. 🙂 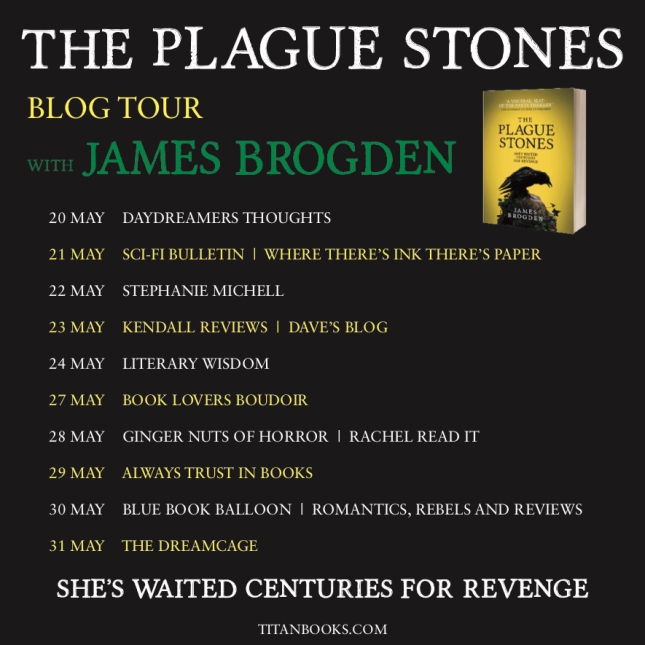 That’s it for now – see you back here soon for a new review. 🙂 Until then,