Angry Robot and Robert VS Redick at Forbidden Planet!

Hey guys and girls of the UK, some great news for you that you’ve no-doubt already heard. 🙂 But you know me, spread the news far and wide I say!

The official UK launch of Angry Robot, the awesome new SF, F and WTF? imprint that’s been steadily building a robot army and bringing us some wonderful new fiction to get lost in, will be on my birthday – the 10th of October! 🙂 So, while I’m here in South Africa wishing I was at the launch to meet the authors and the people behind Angry Robot, many of you will be enjoying great company and even better books at Forbidden Planet! 🙂 I would say I’m jealous, but hey, you wouldn’t really care, right? 😉

And just because I’m not going to be there doesn’t mean I shouldn’t spread the word – after all, the more people read the awesome books that Angry Robot is bringing us, the faster they’ll take over the world!! Mwahahahahaha -ha -huhg -urgh! *clears his throat*

Check out the info below!

Invite everyone you think will enjoy the company of great authors (Dan Abnett, Andy Remic and Colin Harvey) to celebrate the UK launch of Angry Robot! The more the merrier! 🙂

The excellent Robert VS Redick, author of The Red Wolf Conspiracy and The Rats and the Ruling Sea, as well as friend of the ward-master, Peter V Brett, will be at Forbidden Planet too – and here’s the cherry on the icing for sure: Want to get your hands on The Rats and the Ruling Sea before the official publishing date? Well then you better be at Forbidden Planet on the 16th of October!

The event will begin at 6 and go on through to 7 (that’s the evening, yes folks, not even I would wake up that early in the freezing UK!), but you better get there early to avoid having to fight your way through other rabid fans. 🙂 Don’t want to wait until the 29th of October to get your copy of the second book in The Chathrand Voyage (that is the new official publishing date)? Then make a point of getting to Forbidden Planet on the 16th of October! 🙂

Also, if you just can’t make it to the signing (I’ve got an excuse, I’m on a different continent), you can still order your copies of The Rats and the Ruling Sea and should get them well before the 29th. 🙂

And finally, here’s a little something that I saw that’s truly wrong – if you’re on Facebook, a fan of Robert and his work, then join the fan-page! 🙂

Mark has unveiled the blurb and cover for his sequel (highly, highly anticipated!) to Nights of Villjamur – City of Ruin. 🙂

You can go ahead and read the blurb on his blog (just follow the link above), but I thought I’d go ahead and showcase the cover – not yet sure if I like it or not, but one thing is sure – what’s inside will be incredible! 🙂

Next up, Angry Robot has announced who the latest author to join the fold is: Ian Whates! Taken from the website – “He will be writing a series of novels set in one of the most extraordinary fantasy settings since Gormenghast – the vertical city of Thaiburley. From its towering palatial heights to the dregs who dwell in The City Below, it’s an incredible creation. When Tom, a teenage street thief from the depths, ventures into the uppermost levels to impress a girl, the last thing he expects to do is witness a murder. Accused of the crime, he must use all of his knowledge of the ancient city to flee certain death.” Sounds great to me, and, if I may go so far, sounds like Mark Newton might have some competition soon! 🙂

Ian is also a member of Wonderlands (just goes to show how long its been since I was there, feeling very guilty!). 🙂 Ian’s first novel for AR, City of Dreams and Nightmare, will be out in March 2010, with the sequel, City of Hope and Despair, to follow that. 🙂

AR has also unveiled the cover to Dan Abnett’s Triumff: 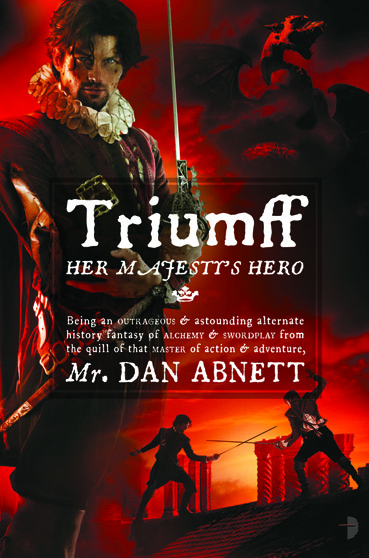 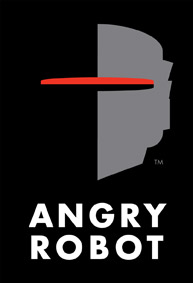 Hey Guys and Girls, here’s some various news-bits from the great people over at Angry Robot!

Dan made his name in the tie-in SF and Fantasy fiction field, selling more than 1.2 million copies in English language of his Warhammer 40,000 novels for Games Workshop’s Black Library imprint. They’ve also been translated into ten other languages. He’s also recently made the UK fiction charts with original Torchwood and Doctor Who novels. His comicbook scripts, for major publishers such as Marvel, DC Comics and the UK’s 2000 AD, have attracted critical plaudits and strong sales on both sides of the Atlantic.

The three novels for Angry Robot will allow Abnett to play to all his strengths as a writer. His penchant for wildly imaginative world-building and lovable characters comes to the fore in TRIUMPH, a ribald, swashbuckling alternate history set in a warped version of our present day … only with Elizabeth the XXX on the throne, ushering a new Elizabethan age of wonder and exploration. This will be published, in both the UK and US, in October 2009.
Next year will see two novels set in the same stunning future-war setting. EMBEDDED sends a journalist into the frontline of a distant planetary war… chipped inside the head of a combat veteran. When the soldier is killed, the journo must use all his resourcefulness to get safely home again, reporting on a live feed all the way. No one writes future war as well as Dan Abnett, and fans of tie-in series such as “Gaunt’s Ghosts” and his “Horus Heresy” novels will be blown away by this bold new move into original science fiction.

Great news! Now, I haven’t yet had the chance to read any of Dan Abnett’s work, and even BL’s (Black Library) books have only recently (within the last 4 to 6 months) been appearing in book shops here in SA, so I’m very pleased by this!

Next up, did you think Lauren Beukes was just an author? Nope! Check out this link!

And here, Tim Waggoner takes us into The Making of Necropolis, a book that I’m itching to get my head into! 🙂

Now, check out this cover:

Damn, that looks CREEPY! I’m definitely getting a copy of this when it hits the shelves!

And last, but not least, the announcement of a space opera with a difference:

We are absolutely delighted to announce our first truly crossover novel. We’re a huge fan of the crossover, and have been working hard behind the scenes to bring you something truly special and innovative. Something that will make other publishers think Why didn’t I think of that?

Novels that cross genre boundaries are not new, but with the release of Perl One (1 December, 2009) we’re not just crossing genres, we’re crossing media! Perl One is a space opera, huge in scope, with one big difference – it’s a “knit your own adventure”.

It can be read front-to back as a standard novel (and what a great novel it is!) but the truly innovative part is that the bottom 20% of every page is set aside for knitting instructions (in a mid-grey font so as not to detract from the prose). As the knitter completes each page, another clue is revealed within their fabric, and by halfway through, the knitter is able to influence the outcome of the story by choosing to knit one here, drop a stitch there, etc. There really has been nothing like this in fiction, ever!

The beauty of the format is that non-knitters can read the story like a straightforward novel (set on the asteroid Perl One, a renegade supersoldier must be brought to justice), and will lose nothing of the vitality of the story. Knitters, however, will get the added bonus of reading the first science fiction novel ever written with them in mind!
Perl One will be available to pre-order from May, and the sequel – The Needle of Axos – will be published by Angry Robot in mid-2010.

Although, looking at the original post, I’m thinking this in an April Fool prank… 🙂