Ages ago I saw the trailer for this ‘indie’ film – directed by The Beach writer Alex Garland – featuring relatively unknown actors and a really interesting looking plot. Then I completely forgot about it until I was bored over the holidays and accidentally stumbled across it thanks to the suggested watch-list on IMDB. So I watched it and I was not disappointed. 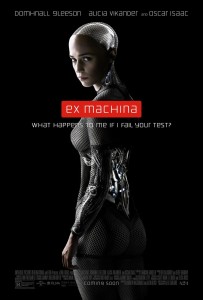 I love films about artificial intelligence. All the various forms and manifestations and imaginings these types of stories come up with never cease to amaze me, and lately, possibly bore me, because so many of these stories fall into trope-ish territory and become extremely predictable while trying to be thought-provoking.

Ex Machina starts out feeling familiar but strange, playing with the ‘mad scientist’ theme while giving us a ‘normal dude’ to champion through all the indie-film weirdness. Then comes the main body of the plot, which starts to feel even more familiar and predictable, and I endured with a multitude of sighs thinking I knew exactly where the story was going. Without ruining a rather unexpected and pretty interesting ending, suffice it to say, I did not see that coming and found the twist rather refreshing and genuinely thought provoking about how our humanity could be used against us by more subtle and insidious machines. Honestly, I felt a lot more freaked out by some of the ideas presented in this film than I have with any other AI story.

There was a lot to like about this movie, but I think Garland (writer and director of this movie) still played it safe in presenting male human characters creating and becoming entranced by a beautiful, sexy, sensual female android. There was literal objectification of women going on in this movie and not in a snarky, feminist-undertone kind of way. The entire premise actually relied on the tired idea of an average man being beguiled by a beautiful woman, a femme fatale even. I think it would’ve been fascinating to explore the same story idea with the genders reversed.

That said, this movie still made me think long after the credits rolled and I really enjoyed Alicia Vikander as the android Ava. Ex Machina gets 3.5/5 ink splats from me.

Posted by suzannevanrooyen14 on January 6, 2016 in Reviews