Double-Review time again! And since this’ll be the last review-post for 2013, let’s get to it, shall we? 🙂

The Terminal Move by Dilman Dila

Back when this tale was announced, Dilman was interviewed and after reading that interview I was very interested to read what he had written; while AfroSF had proved that the continent of Africa has great SF-storytellers, it also went a long way to showing how these storytellers flavoured their tales with cultural and mythological aspects unique to Africa – and I expected the same thing from Dilman.

The tale follows a tribe during their long search for a new home; they lost a conflict with a rival tribe and had to give up their home, which forced them into a long journey, taxing not only their bodies but also testing the tribe’s resolve. Eventually, they find an idyllic place, but this is when their troubles really begin, setting up not only a conflict that could ultimately destroy the tribe but also drive deep wedges between its people.

The tale is told in a style that most readers will find strange, or at the very least, different, to what they’ve encountered before.It has the flavour of a fable, or a story passed down through the generations with practically no alterations made to its rhythms and structure, so it isn’t told in a style that readers may consider ‘modern’, but I didn’t have any problems with it. In fact, if this tale had been written in any other style it would probably have come across as contrived, and the tale would have suffered for it.

As such, the characters’ foundation-roles as archetypes rings a bit stronger than anything else I’ve read, which made it difficult for me to connect with them on a level needed to create that sense of empathy which all storytellers strive to achieve with their characters. This kind of characterization suited the tone and timbre of the tale, though, so I guess it worked. 🙂

In terms of world-building the reader is shown glimpses of the tribe’s culture and beliefs – there’s enough to keep it interesting, though a particular type of creature in the tale might strike the reader as being out of place, or at the very least something that that Dilman used to try and bridge the gap between the cultures he grew up investigating and those of readers on continents other than Africa.

‘The Terminal Move’ is definitely the most different tale that Fox and Raven has brought us so far – it is utterly unique and deserving of the spot it has claimed in Fox and Raven’s first anthology, but there is a chance that it may be a little too different to appeal to a wider readership. I’ll be reading Dilman’s work further, though, precisely because it’s so different. 🙂

To order you Kindle-copies of ‘The Terminal Move’, click here for Amazon US and here for Amazon UK, and check out ‘Son of Suns’, the story’s awesome accompanying soundtrack, over on SoundCloud.

‘Project Hydra’ is definitely one of the most original and disturbing tales I’ve read in a long time.

In this tale, the reader is introduced to a group of co-workers who have to deal with a new and mysterious project initiated by their superiors – the ‘project’ of the title. How each individual worker deals with the questions raised by this new workplace phenomenon, and how they react when it is revealed, is what this tale is all about – and it’s an awesome play on the term, ‘Hydra’.

Everything works wonderfully (and exceedingly creepily) in this tale – the characters are well-rounded and unique, each with their own mannerisms and character-arcs; the prose is flowing and uncluttered; the descriptions short yet vivid. The tension and horror of the tale builds steadily as its premise unfolds, and I’m sure plenty of readers will be keeping an eye on those office memos, just in case… 😉

It’s a memorable and chilling tale, and I’m definitely looking forward to more from Anton Sim.

To order your Kindle-copies of ‘Project Hydra’, click here for Amazon US, here for Amazon UK, and head over to Fox and Raven’s SoundCloud stream to give the awesome soundtrack, Cutthroat, a listen. 🙂

And remember to check out Fox and Raven Publishing – big things coming in 2014! 🙂

That’s it for me for reviews for 2013, folks. Wishing you all an immensely epic festive season / holiday / whatever-you-call-it, and I hope you all get some truly awesome books as presents! 🙂

Posted by Dave de Burgh on December 24, 2013 in Fox and Raven Publishing, Reviews

Hey guys and girls, I’m back with the announcement of a great new anthology coming from my publishers, Fox and Raven Publishing. 🙂 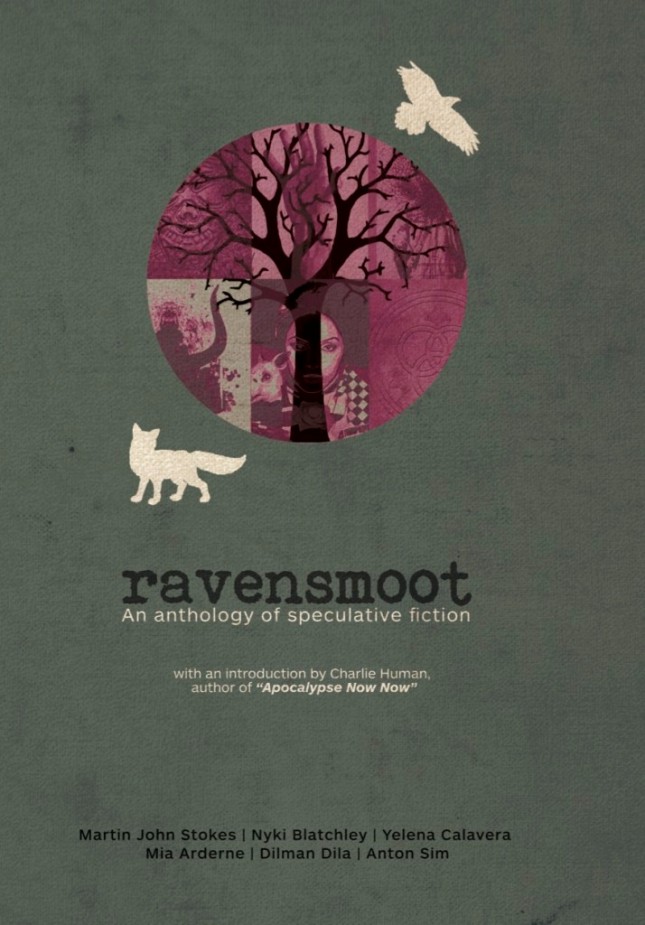 In this debut anthology of speculative fiction short stories, Fox & Raven Publishing presents a smorgasbord of delectable tales. In an eclectic mix of horror, fantasy, dystopian dreampunk and all-too-real thrillers, ravensmoot exhibits some of the best new writing in the genre.

With a cartel of South African, Ugandan, British and American writers, ravensmoot promises to delight readers looking for powerful writing that isn’t afraid to push the boundaries of their respective genres.

We are very happy to announce that ravensmoot will be available as a print anthology in select bookstores across the country before Christmas! And yes, that makes this the first Fox & Raven print publication, so we’re all warm and fuzzy about that.

I’ve read all but two of the stories in this anthology, and I can assure you that you’re in for some excellent tales! I’m busy reading ‘THE TERMINAL MOVE‘ by Dilman Dila at the moment, after which I’ll get stuck into ‘PROJECT HYDRA‘ by Anton Sim, so expect reviews shortly. 🙂

As it stands now, the stories that will be included are:

THE TERMINAL MOVE by Dilman Dila,

The anthology will be available before Christmas as a limited edition paperback (with the great, eye-catching cover you see above), with the eBook edition becoming available towards the end of January 2014.

If you’re in South Africa and want to pre-order a copy for yourself or for a friend, send an email to Marius Du Plessis, Director at Fox and Raven Publishing –

The paperback will cost you a measly R140, which includes postage anywhere in South Africa – a helluva deal if you ask me, and yes, I’ve already pre-ordered my copy. 🙂 Everyone’s allowed a present to themselves, aren’t they? 🙂

I will, of course, keep you updated as to the official released-date for the eBook-edition of ravensmoot. 🙂

Posted by Dave de Burgh on December 2, 2013 in Fox and Raven Publishing, Spotlight