I’m a little ashamed to admit that this is the first novel I’ve read by Octavia Butler. I had heard very good things about this writer and had been meaning to read her work for ages. Finally I have…

*Minor spoilers ahead – you’ve been warned* 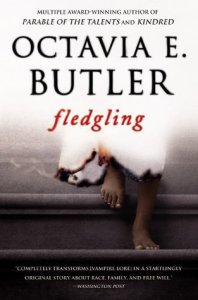 Fledgling, Octavia Butler’s new novel after a seven year break, is the story of an apparently young, amnesiac girl whose alarmingly inhuman needs and abilities lead her to a startling conclusion: She is in fact a genetically modified, 53-year-old vampire. Forced to discover what she can about her stolen former life, she must at the same time learn who wanted–and still wants–to destroy her and those she cares for and how she can save herself. Fledgling is a captivating novel that tests the limits of “otherness” and questions what it means to be truly human.

As I’ve said before, I’m a fan of vampires, so I thought I’d kick off my foray into Butler with her vampire novel. I’ll admit I expected a little Rice-ish flair and a lot more vampiric romanticism than this book delivered. Once I got over my expectations for the novel and started reading the book for what it was, I found it extremely enjoyable and thought-provoking.

The book uses an old trick allowing the main character, Shori, to introduce the reader to Butler’s vampire world. Shori has amnesia and can remember nothing about her life as ‘Ina’ – Butler’s word for vampire. Using this memory-lapse device, the book gets away with a fair amount of exposition and info-dumping because it is actually relevant to the character and not only inserted for the reader’s benefit. This, while fascinating, did make for some slow reading at times. This book is not plot driven but rather a character study as Shori discovers her past and who she is now minus her memories. The story examines the idea that we are the sum of our experiences and what might happen when we can no longer remember those experiences, who do we become and who are we to those who remember us from before?

As the cover shows, Shori isn’t white and the story examines issues of race and racism through the lens of the vampire mindset, which made for some interesting discussions among the ethnically diverse characters, human and Ina alike. But perhaps the most interesting aspect of this story was the structure of Ina society and the symbiotic relationship the vampires form with humans, and how various vampire families feel about their necessary relationship with humans. This was the main theme of the book, the juxtaposition of otherness with humanness and what it meant for those like Shori caught somewhere in between the two extremes.

What I absolutely adored about this book was the exploration of sexuality and polyamory both within Ina society, and between Ina and human. The relationships in this story are complicated and challenge certain sexual norms. For example, within Ina culture, matings are arranged by families where bands of brothers will mate with groups of sisters. Mates share each other within this familial union and children are raised as the children of all the sisters and brothers regardless of who actually fathered or birthed the child in question. I found this arrangement fascinating especially considering that Ina would continue sexual relationships with their symbionts (specific humans chosen as companions and for nourishment) at the same time. Of course, being Ina means viewing the world a little differently and responding differently to emotions which, while still identifiable as human, are quite different from human experience. While this book explores sexuality, the view of gender remains extremely binary, with Ina society split into male and female groups except when mating is involved. How such a society would handle or accept an intersex or trans individual never came up for discussion.

Despite being about vampires, this book is not the normal paranormal fare and quite quickly establishes itself as more of a political-come-legal drama with occasional blood-drinking. This latter aspect of the book was a little disturbing at times because Shori, despite being 53 years old, is considered a child by Ina standards and is described as looking no more than ten years old by human standards. And yet, this little girl seduces and has sex with various human adults. While considered normal by the Ina community, this did make me uncomfortable especially when the adult humans react sexually around her. I tried to forget Shori was physically ten and let myself imagine an older teenager instead. Again, this is an example of how Ina and human practices differ, but it was a little difficult to read.

Because of Shori’s amnesia and her Ina-ness, I found it quite difficult to relate to Shori and become truly emotionally invested in the character who was distanced from herself and thus from the reader too. What kept me turning pages wasn’t so much my love of or concern for the character but rather my fascination with the vampires on a more intellectual level. Their history, their politics, their social structures, their law – all very interesting even if it didn’t require much emotional engagement. Consequently, while I did enjoy this book I doubt I’ll ever reread it the way I have other vampire novels like Brite’s Lost Souls. This vampire novel didn’t offer much in the way of Gothic romanticism, but was an entertaining read none-the-less. It gets 4 ink splats from me.