Hey everyone, I’m back with the first in what will be a whole slew of reviews – at least, that is, until I get started with writing the second book in my Epic Fantasy trilogy… 😉

That said (shameless self-promotion, I know!), I received an ARC of ‘The Bone Season‘ via Jean Pieters at Horizon Books (Thanks, Jean!), and Jean promised me a great read. Did Samantha Shannon’s debut fulfill that promise? In some way, yes – in others, not as well as it could have.

The year is 2059. Nineteen-year-old Paige Mahoney is working in the criminal underworld of Scion London, based at Seven Dials, employed by a man named Jaxon Hall. Her job: to scout for information by breaking into people’s minds. For Paige is a dreamwalker, a clairvoyant and, in the world of Scion, she commits treason simply by breathing.

It is raining the day her life changes for ever. Attacked, drugged and kidnapped, Paige is transported to Oxford – a city kept secret for two hundred years, controlled by a powerful, otherworldly race. Paige is assigned to Warden, a Rephaite with mysterious motives. He is her master. Her trainer. Her natural enemy. But if Paige wants to regain her freedom she must allow herself to be nurtured in this prison where she is meant to die.

First things first, ‘The Bone Season‘ is a blend of Alternate History and Urban Fantasy. A specific event occurred and something else happened, which led to the creation of the organization / government known as Scion. This event had far-reaching effects, but the focus of the story is the UK. That said, the changes that Samantha brought in -the why and how of the world as it exists in the novel- were interesting, captivating and clever. These changes influenced every person in the UK, from the royalty through to the nobility and down to the peasantry and man on the street. People grew up with tales that served to frighten them and keep them scared and controlled – tales of ‘voyants, who have been blamed for every terrible thing that has happened, from terrorist attacks to serial killers

As you can imagine, most people growing up in this kind of world will blindly do what they’re told and what’s expected of them, while the minority -those who feel the restrictions and are directly influenced by by them (the ‘voyants) try to survive outside of the system as best they can. Samantha does a great job of showing the differences between these levels of society, and I’m sure you’ll be as undecided as I was about which side of Scion-control you’d let yourself live under – both sides have their own unique positive and negative aspects, and so the reader is allowed to make their own choice.

That said, the character-focus in on the oppressed, with very little shown of the oppressors. Surprisingly, this worked well for me. You see, the tale focuses on Paige, and as her story unfolds we’re shown that she and her fellow ‘voyants are indeed oppressed, but Samantha also manages to make it clear that the oppressed aren’t the saints of the tale, and that the oppressors aren’t all evil or bad. It’s a constant theme throughout the novel and it’s well-handled and explored.

Character-wise, Paige isn’t exactly a revelation – as with all characters in this sub-genre, she has great knowledge of some things and almost no knowledge of others, making her both naive and well-informed (strange, I know) and practically guaranteeing that she’ll be plunged in over her head, which does happen, multiple times. She is likable and relatable, and the reader get’s to know her not only as the novel’s ‘voice’ but also as the lynchpin between two cultures, an aspect of the novel that built gradually and naturally. The reader also understands her through something that could easily have been just a plot-device, but which is revealed as absolutely integral – dreams. Only one aspect of Paige irritated me, which ties into the world-building facet of the story –

There are many different kinds of ‘voyants in Paige’s world, and there are particular levels and categories, each having -mancer tacked onto the end of the ‘voyant’s category-term or category-name. Paige’s characterization suffered a bit because the reader was exploring and getting to know this world through her – you see, the reader is expected to remember all of the different -mancers, and what they can do; either that, or the reader is expected to keep on flipping back to the front of the book or to the glossary, where all the different kinds of -mancers are explained. The first three or four that came up in the story were interesting – after that I just glossed over the terms and their meanings, because I didn’t want to have to remember or study what I was reading, I wanted to ‘live’ it through Paige. It is, fortunately, the only aspect of the world-building of ‘The Bone Season’ that disappointed me – but since it’s one of the most important aspects, it affected everything else. 😦 Samantha put a lot of thought into this society’s structure, though, which shows that she’s been developing it for quite some time, and I’m sure what has been revealed in the book (the first in a large series) is just a hint of what is to come.

As regards the blurb-mentioned ‘Rephaite’, I found their culture to be interesting, but not particularly memorable; their portrayals switch between stern, unfeeling and brutal overlords to enigmatic protectors, and this was a bit too black and white for me. Also, the main Rephaite, Warden, had too much of a resemblance to a character from a massive Epic Fantasy saga (at least, in my mind’s eye – I refer to Anomander Rake from The Malazan Book of the Fallen), so I struggled to form a connection with him. Him and his people were interesting, though, as was the manner in which he took Paige under his wing, and the story ends with everyone and everything in flux, which bodes well for the sequel.

Taking all these aspects of the novel together, Samantha shows herself to be a gifted writer and storyteller, and ‘The Bone Season’ is a terrific debut, but it is a debut – a little too focused on the details, and a little too restrictive of the antagonists. But it is a great read, and I’m sure many of you will enjoy it. It’s not vampires, werewolves, angels or demons (which I’m utterly sick to death of), and it’s also the opening salvo in a series that will probably get much better and bigger. 🙂 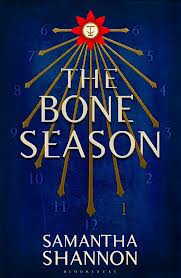 To order your copies, click here for Amazon UK and here for South Africa; check out the official ‘The Bone Season Books’ website here, and go ahead and ‘Like’ the Facebook Page for updates on book 2. 🙂

One response to “Review: The Bone Season by Samantha Shannon”