Thanks to the awesomeness of Bradley Lutz at Jonathan Ball and Anna Gregson at Orbit, I’ve been included in the annual Hawthorn Moon event. 🙂

The Hawthorn Moon (named after a holiday in one of Gail’s novels) is an annual event, which takes place on many different blogs and websites, hosting brand-new excerpts, giveaways, Q & A’s and guest-posts. The scope is such that every title that is spotlighted in The Hawthorn Moon drums receives massive coverage, making sure that new readers and long-time fans have all the info they need about the novel – and this year’s event focuses on the sequel to ICE FORGED, Book 1 in The Ascendant Kingdoms Saga. (US / UK / Australia) 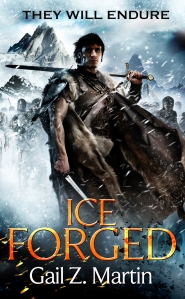 Condemned as a murderer for killing the man who dishonored his sister, Blaine “Mick” McFadden has spent the last six years in Velant, a penal colony in the frigid northern wastelands of Edgeland. Harsh military discipline and the oppressive magic of the governor’s mages keep a fragile peace as colonists struggle against a hostile environment. But the supply ships from Dondareth have stopped coming, boding ill for the kingdom that banished the colonists.

Now, McFadden and the people of Velant decide their fate. They can remain in their icy prison, removed from the devastation of the outside world, but facing a subsistence-level existence, or they can return to the ruins of the kingdom that they once called home. Either way, destruction lies ahead…

The sequel is REIGN OF ASH, and here’s some info about the title:

And here’s Gail herself, delving deeper into the magic and the characters of the world of the Ascendant Kingdoms – enjoy!

Q:  For readers who haven’t met you, tell us a little about your books.

A:  I write the Chronicles of the Necromancer series for Solaris Books and the Fallen Kings Cycle and Ascendant Kingdoms Saga for Orbit Books.  I’ve also been in a variety of US and UK anthologies, and I publish two series of short stories on Kindle, Kobo and Nook—the Jonmarc Vahanian Adventures and the Deadly Curiosities Adventure.  My most recent book is Ice Forged, the first book in the Ascendant Kingdoms Saga, and the next book, Reign of Ash, will come out in April, 2014.

Q:  Ice Forged started a new series for you, with a different world and all-new characters from what you’ve written before.  What made you decide to write a different series instead of continuing with your other characters?

A:  I still have plans to write more stories in the Chronicles world, but I had reached a good place to take a break and do something different for a while.  There’s a natural break in the plot line after The Dread that makes a logical resting point.  So while my characters are taking a much-deserved vacation, I had the opportunity to write some new stories that had been banging around in my head.

Q:  In Ice Forged, the plot hinges on a war going terribly wrong and mages on both sides launching a doomsday strike that not only rains down fire from the sky but also cause magic to stop working. Why is the failure of magic so important?

A: In Blaine McFadden’s world, magic is the convenient short-cut.  It’s like our power grid.  Sure, you can wash clothes without electric appliances, but it takes more work and nowadays, does anyone remember how?  It’s the same way in Blaine’s world.  The old ways of doing things without magic have been forgotten, and people have come to rely on magic for as a quick fix.  Imagine what a shoddy workman could do with a little bit of magic, things like propping up a poorly built wall or shoring up a sagging fence.  When the magic fails, so do those fixes, and things literally begin to fall apart.  Then there are the bigger magics, like keeping the sea from flooding the shoreline or using magic to heal.  When magic doesn’t work anymore, how do you heal the sick or keep back the tide?  Donderath has a really big problem on its hands.

Q:  Where did the genesis of the Ice Forged’s main character, Blaine “Mick” McFadden, begin?

I really started with the idea of exile, and what would it have been like if England had sent its prisoners north to somewhere like Iceland or Greenland instead of to Australia.  (Obviously Russia had Siberia, but that’s different, in part because there was no sea voyage.)  Then I started to think about why a character would be exiled, and murder was a good reason.  But it had to be a murder the reader would agree with (so many readers have commented that Ian McFadden “had it coming”).  Where Tris, in my first series, was accused of a crime he didn’t commit, I wanted Blaine to be unrepentant about a crime he did commit.

Q: The setting of Velant is a really interesting place, because you’ve combined elements of post-apocalyptic with the classical idea of northern wastes we often see in fantasy, but this setting really affects the characters, doesn’t it?

A: Being sent into exile in an arctic prison colony is bad enough, but having the magic fail is like losing the power grid—it takes away an important factor for survival.  I had focused on really big magic in my first books, and in Ice Forged, I wanted to look at what it would mean to lose the little magics that people used in their everyday lives.  Food spoils, herds die, crops fail, magical repairs to buildings and ships fall apart, and things people used magic to do as a short cut now needed to be done the old fashioned way, which few remember.

Velant is the same distance as a sea journey from Donderath that Australia was from England, in good weather.  The weather is dramatically different, harsh and inhospitable.  It gets the arctic 6-months of day and night.  The prison itself is run by a commander who was a “useful monster” during a war, but too feral to bring home, so they exiled him by putting him in command of a prison no one else wanted to run.  The guards are likewise exiled because they were unsuitable for normal military life and civilized society.  While many of the convicts were exiled for real crimes, many more were sent away for petty infractions, political reasons, or just being poor.

It’s not the kind of place anyone wants to live in, but it’s amazing what the human spirit will endure!  Prisoners who earn their “ticket of leave” become colonists, and manage to make Edgeland their home.

A:  Good question!  I’ve just signed on with Orbit for another two books in the Ascendant Kingdoms world, so I’m working on the sequel to Reign of Ashes (it’s weird how you’re working two books out from what anyone else has read).  I’m also committed to bringing out a new short story every month, so that’s actually turning out to be a lot of fun.  And I’ve got some different directions I’d like to explore in addition to epic fantasy, so I might just surprise you and turn up with something completely different one of these days!

The Hawthorn Moon Sneak Peek Event includes book giveaways, free excerpts and readings, all-new guest blog posts and author Q&A on 21 awesome partner sites around the globe.  For a full list of where to go to get the goodies, visit www.AscendantKingdoms.com.

@GailZMartin Book Giveaway on Twitter—Every day from June 21 – June 28 I’ll be choosing someone at random from my Twitter followers to win a free signed book.  Invite your friends to follow me—for every new 200 followers I gain between 6/21 – 6/28, I’ll give away an additional book, up to 20 books!

Gail Z. Martin is the author of Ice Forged in her new The Ascendant Kingdoms Saga (Orbit Books), plus The Chronicles of The Necromancer series (The Summoner, The Blood King, Dark Haven & Dark Lady’s Chosen ) and The Fallen Kings Cycle (The Sworn  and The Dread).  She is also the author of two series on ebook short stories: The Jonmarc Vahanian Adventures and the Deadly Curiosities Series.  Her books are available in bookstores worldwide and on Kindle, Kobo and Nook. Find her online at www.AscendantKingdoms.com.

Many thanks to Gail, Bradley and Anna for this!
Until next time,

Posted by Dave de Burgh on June 26, 2013 in Interviews, Spotlight