Anthology Review: Mirages – Tales from Authors of the Macabre (Edited by Trent Zelazny)

I received this anthology a couple of months ago from one of its contributors, Curt Jarrell, a fellow bookseller and champion of all things Speculative. 🙂

I’m really glad that I got an opportunity to read this anthology, because it’s one of the best collections of dark, unsettling tales that I’ve ever read. I won’t say that it was a pleasurable read -I’m not sadistic or masochistic- but it was definitely an eye-opener, and supremely memorable.

The anthology kicks off with The Conclusion by Tom Piccirilli, which was, for me, a beautiful and heartbreaking tale about how one man deals with the impending death of someone very close to him – the story was dark and, in places, unsettling, but quite beautiful.

The next tale, American Chinnamasta by Jeffrey Thomas, was insanely twisted and yet deeply affecting – we become a passenger on a girl’s journey toward getting the love and acceptance from her father she always believed she lacked, and it’s what happens during this journey, what she does, that really shocked and held me.

Dumb Luck by Barb Lien-Cooper and Park Cooper was awesome – a truly speculative look at luck which I really enjoyed! Sort of still boggles my mind. 🙂

Poor Old Soul by Lee Allen Howard gave me a new perspective on those old ladies everyone seems to know – the nosy ones, those who always have opinions, who’s loneliness seems sadder for all that; very good tale. 🙂

No Name, No Voice by Tina Swain was sooo damned good – an excellent exploration of the kinds of thoughts we hide from everyone, those bloody, murderous, deviant thoughts.

Reprieve Eve No. 33 by Joe S. Pulver Sr. was incredibly unsettling and different to anything I’ve ever read – I felt like I was in the midst of a deeply fractured and ill psyche, where very little made sense, but with sights and thought paths that kept on drawing me deeper. Very strange and darkly brilliant.

Switchbitch by Gerald Hausman answered the question for me – what would it be like in someone else’s body, and the answer isn’t as cool or exciting as what I envisioned. A short but excellent tale.

Bastard by Billie Sue Mosiman was quite scary, in that it showed me how badly the search for answers can sometimes go, or even how sometimes that search shouldn’t even be undertaken.

Angela & the Angel by Scott Bradley and Peter Giglio was, to my mind, the saddest tale in the collection, because it illustrated -in stark and jagged-edged lines- just what can happen when what you get is not what you wanted, or the idea behind something is more powerful than the disappointing reality.

Offline by Kealan Patrick Burke was terrifying and very, very creepy – after reading this I just didn’t look at electronic communication (email, social networks, etc) the same way. It’s a tale that’ll probably haunt you a bit, too.

Fairy Tale by Lori R. Lopez was dark and sometimes brutal, a tale of a desperate woman and a desperate man, and how both find release of a kind, very cool.

The Sum of Spectacle by Jason S. Ridler was a fun, almost frantic tale, about the realizations concerning loss and how, sometimes, we find our way back – yet the path and the destination might be darker than we imagined.

The Descent Upstairs by Leigh M. Lane is a tale that I’ll probably remember for a long time – I certainly wouldn’t want to be pushed as far as the poor woman in this story was. Sort of makes me think that the fantasies we have regarding how to deal with people who irritate us and enrage us could be dangerous fantasies to have…

The Pit by Joe R. Lansdale was the most difficult story for me to read, which might sound strange to you once I explain why – I abhor violence and cruelty against animals, and there’s a scene in this tale which is pretty damned hectic; which means that it’s incredibly well-written, and not just that scene but the entire story. It focuses on the battle of one man to survive in to-the-death battles that lead to absolutely no kind of victory, even for the survivor. It’s bleak and brutal and brilliant.

Jagged Night by Curt Jarrell was brutal, too, and sad. It’s the tale of a man who loses it and does something terrible, who then runs and tries to not only survive but to live, dogged the whole time by what he did. It’s a dark tale, very unsettling, but honestly so – we can never escape our mistakes, can we?

Shattering the Meat Tunnel by E. A.Black was a really distasteful story, but a damned good one, too. Two lonely people are randomly thrown together, one of them desperate for any kind of contact, the other made angry by the loss of this contact – both of them hurtle towards a climax that is terrible and brutal.

Beast: A Fable for Children by Edward Morris is definitely not for children, not young human beings, if you get my meaning, but a tale for the frightened child in all of us who has had to experience something that was levels above what we could understand at that age. But it’s also a tale about how that frightened child will deal with this experience, and how the outcome will change them forever and in ways that they probably won’t even understand with a grown-up mind. It is sad and beautiful.

Taken together, this anthology is an exploration of the darker, more distasteful aspects of being a thinking, feeling human being. It doesn’t shy away from disturbing imagery or ideas, doesn’t pull any punches at all – every tale was something new and thunderstorm-incredible, something that momentarily stole my breath, and I can only applaud Trent for bringing together these awesomely talented authors. It’s an anthology that lingers and taunts and, sometimes, disgusts, but it is an excellent collection, and all of these authors are now on my radar. 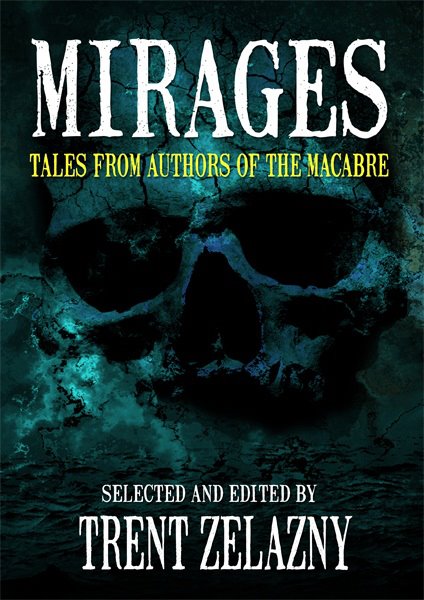 Huge thanks to Curt Jarrell for sending me Mirages – loved it!

Posted by Dave de Burgh on February 1, 2013 in Reviews

4 responses to “Anthology Review: Mirages – Tales from Authors of the Macabre (Edited by Trent Zelazny)”