Totally Tor: News and How to Take Over The Genresphere!

Hehehe did I just coin a phrase? 😉 Anyway, let’s get into it!

First off, Tor.com is bringing us a new story by Michael Swanwick and Eileen Gunn; it’ll go live on the site on the 21st of December, but registered users (yep, I’m one of them) will have the story in their inboxes a week early. 🙂 Here’s editor Patrick Nielsen Hayden to tell you a bit more:

“Our Christmas story for 2010, “The Trains that Climb the Winter Tree” by Michael Swanwick and Eileen Gunn, is shocking, lyrical, inventive, and as you might guess, a little mad. It will appear on the site on December 21st, but if you were a registered member ofTor.com, you’d be getting it a week early, personally emailed to you by elves and wood sprites laboring in the vast Tor.com network operations center.”

And here’s a short excerpt of the story to whet your imagination:

It was the middle of the night when the elves came out of the mirrors.

Everyone in the house was asleep. Outside, the city slumbered. Silent as shadows, the warriors went from room to room. Their knives were so sharp they could slit a throat without awakening their victim.

They killed all the adults.

The children they spared.

The bodies were carried away, back through the mirrors. Four of the elves swiftly stripped naked. They put on the adults’ nightclothes over their sexless bodies. Their own clothing they hid at the bottom of dresser drawers where the children never went. Then each one slowly and carefully assumed the form and features, down to the most intimate details, of Father, Mother, Grandmother, and Great-Aunt Adelaide.

Meanwhile, the other warriors were fetching boxes from the far side of the parlor mirror. With preternatural grace they removed from them tiny, toy-sized locomotives and passenger cars, boxcars, coal hoppers, refrigerator cars, gondolas, tank cars, flatbeds piled high with logs, floodlight cars, mail cars, ore cars, cabooses, and a tiny string of circus cars with gorillas in cages and giraffes poking through the roofs. . . .

Unwrapped tissue paper foamed up into drifts, which were then whisked magically away. Clever elfin fingers assembled tracks and placed alongside them stations, houses, bungalows, garages, churches, restaurants, fruit and vegetable stands, a roller rink, a grain elevator, a lumberyard, a coaling station, factories, water towers, and a central roundhouse with a turntable. Bridges spanned imaginary rivers. Tunnels split papier-mâché mountains. The transformers were hooked up, the electrical connections made, and the trains set in motion.

Then the elves left. The four who remained went to three separate bedrooms where they lay down and pretended to sleep. The one who was not Father pretended to snore.

It was Christmas Eve, and nobody outside the house knew that life inside it had changed forever.

Here’s the artwork commisioned for the story, done by the excellent Gary Kelly: 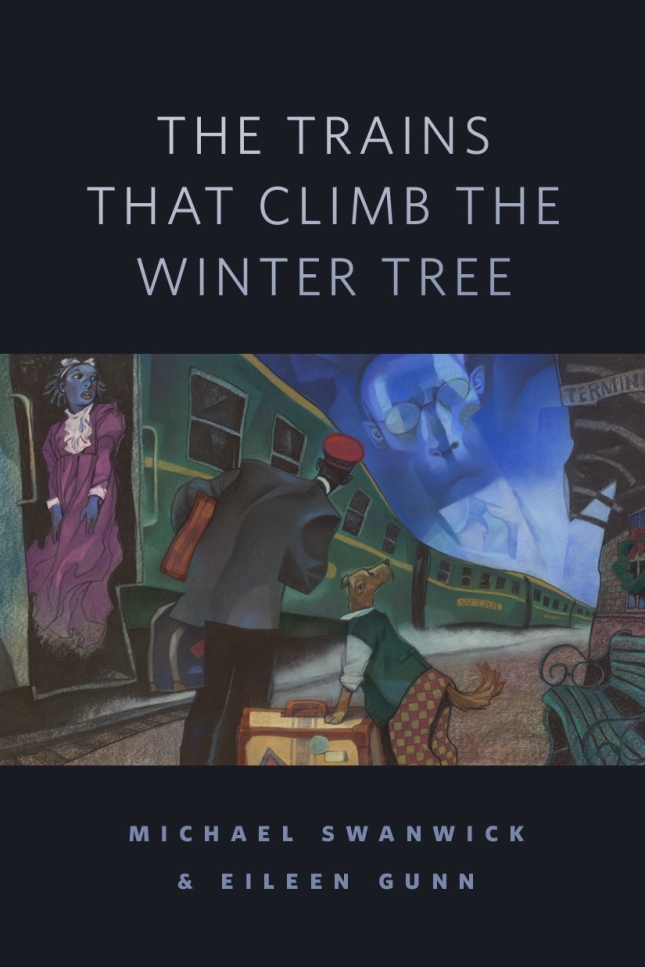 Next up, Tor.com is taking over the Genresphere! 🙂 Tor.com has already launched Tor.com Fantasy (run by the excellent Aidan of A Dribble of Ink) and Tor.com Steampunk (Ay-leen the Peacemaker does the honours here), but the latest news (which hit today) is that Tor.com has also started Tor.com Science Fiction, run by none other than Mark Chitty from Walker of Worlds! 🙂

This is really great to see – sure, it’s a Tor.com endeavour but the news covered by each satellite will not be limited to Tor.com or, for that matter, Tor; there’s something to be said for a big publisher realizing that readers everywhere read widely, not limiting themselves to specific authors or publishing houses – these endeavours are squarely about getting the news out there. 🙂 So a hearty well-done to everyone involved!

Here are the links you need:

And finally, the Solstice Giveaway is still running, so make sure of your entry! 🙂 (Note – I *hope* it’s still running – couldn’t get into Tor.com to verify, seems I’m having a problem with my connection)

That’s it for now, see you back here tomorrow. 🙂

One response to “Totally Tor: News and How to Take Over The Genresphere!”