Yep, that’s right folks, Lauren is probably in the UK as I’m typing this. 🙂 She’ll be appearing at three separate events where you can go check her out – be sure to take your copies of Moxyland along with you, I’m sure she won’t mind signing them (she signed my two copies of Moxyland, one ARC and one SA edition, and she also signed my copy of Zoo City, at a launch earlier last month). 🙂

Here are the details:

Lauren will be appearing TONIGHT at The Antelope Tavern (hehehe weird but cool name, can’t imagine the people inside bounding around energetically, though) as a special guest of the British Science Fiction Association; she’ll be reading from Zoo City -and Lauren does awesome readings, let me tell you- as well as answering some questions about her work afterwards. Oh, and keep an eye out for some other Angry Robot surprises bounding around The Antelope Tavern… 😉 Oh, and you don’t have to be a member of the BSFA to attend, how awesome is that?!

Tomorrow is the big event: Lauren will be launching Zoo City at Forbidden Planet’s Megastore from 6PM to 7PM, so be sure to get there early to avoid queuing (or get there early to get your queuing done, er, early 😉 ). Forbidden Planet have also teamed up with Angry Robot to bring you a first-of-its-kind exclusive offer: 100 (no more, no less) LIMITED EDITION HARDCOVER copies of Zoo City have been made available – so if you can’t wait until September to get your copy of Zoo City, you’d better follow this link and buy a copy before they’re all gone! Would absolutely love me one of those, but I’m not as lucky as you all in the UK. 🙂

But that’s not all – you’ll get one final opportunity to meet Lauren: she’ll be a guest of the British Fantasy Society‘s first Open Night (technically, Open Afternoon) on the 31st of July – check out the link for the details.

So there we have it, folks! Three opportunities to meet one of the most exciting authors writing today – Lauren’s an awesome lady and her novels are kickass (Moxyland reviewed here, Zoo City reviewed here) and she’ll probably be taking the UK by storm. 🙂 Enjoy the events! 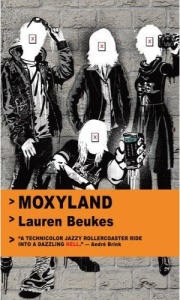 If you can’t make it to these events, have no fear – you can still order copies of Zoo City from Forbidden Planet (hopefully they’ll have some left!) and have it signed by Lauren, otherwise, order Zoo City here and Moxyland here.