Welcome to the third and final Legends of the Red Sun character interview! These interviews were conducted with Mark Charan Newton and myself, and I decided to interview some of the characters that appear in Nights of Villjamur and City and Ruin.

Brynd is one of the most intriguing characters I’ve met in Epic Fantasy; not only is he a military tactician and capable of also holding his own against those more political than him, but he’s also deeply honourable and focused when it comes to his duty. There are layers and layers to this man and as you follow him through Nights of Villjamur and into City of Ruin, you may find him to be one of the more memorable characters in Epic Fantasy. 🙂

Without further a-do, here is your glimpse of him:

Dave: Thank you for agreeing to this short interview, Commander. I’m sure the rest of the Night Guard can keep Villjamur and the Empire safe while we chat. 🙂 So, how long have you been with the Night Guard? Did you always feel called to stand in a position of protector / guardian?

Brynd: The Night Guard? A good decade, though at times it feels like I was born into it. From a young age, it was clear the colour of my skin was going to cause me trouble – cultures tend to dislike that which is different – and so I had to prove a great deal to the world. You could say it makes me a driven person, this effort to prove myself – which in turn has resulted in my progress through the armed forces so quickly. (That, and I believe sometimes people fear me – which is often a boon.) As for feeling called to stand as protector, well, there is perhaps an instinct in all soldiers to do so – linked to a motivation to do good. I don’t think anyone who is right for the job should say that they were destined to be in charge of the armed forces though – no one that has served on the front line would really utter such things.

Dave: That’s a good point you make; most soldiers find themselves wanting to keep their heads down and concentrate on following orders and looking out for themselves and each other, if I’m not mistaken. 🙂 Speaking of your uniqueness, have you found yourself targeted or singled out on occasion? I can imagine that rising through the ranks, just getting a foothold even, must have proved difficult?

Brynd: All my life I have been singled out, but it’s important not to treat your own self like a victim. Therein lies a dangerous path. Every time I look at another person, I can see their instant reactions, their surprise, sometimes their fear. I could drive myself mad by dwelling upon such things.

As for getting a foothold, luckily the armed forces tends to be a case of merit – so no matter who or what you are, you prove your value. Having said that, I am lucky to have received a decent schooling due to my parents having some wealth and status – something that seems related to one’s own destiny in a place like Villjamur. There are huge swathes of humanity unluckier than myself, and I remind myself of that often.

Dave: Speaking of those less fortunate, how do you feel about the refugees, and how would you deal with the situation if you were able?

Brynd: The refugees… well, the explanation from the Council is that they couldn’t be accepted into the city because the pressure on resources would be too great – and in that, I agree. My official position is, of course, to accept the will of the Council. It doesn’t mean I like what I see gathered outside Villjamur – perhaps there could be some charitable acts, food packages and the like, but then that may well anger the man traditionalists within the city walls.

Dave: Did your parents have aspirations for you that didn’t include the Night Guard? What aspirations did you have for yourself? Have you had to give up on some dreams?

Brynd: I’m not much of a dreamer, in that sense. Of course we all have ambition and good intentions – mine was simply to prove myself the equal of others. I am what I am, and that should be no different to anyone else. We should be judged by our character and our actions. If that can be labelled as a dream, then so be it. Otherwise I just get on with the job of soldiering – which has been my only aspiration.

Dave: Lastly, looking back on your life and accomplishments so far, do you recognize a turning point? And are you satisfied with the decisions you’ve made?

Brynd: I don’t see life as having any major turning points. You play with the cards you’re dealt and try to make the most of them. I try to see things logically. Perhaps, when in combat, I hope the decisions I made minimized the loss of life, and I can’t think of many reasons when this hasn’t been the case. But I’ve no regrets, at least, and if I’m ever disappointed with my acts I’ll try improve. It helps, being in my position, if you live by logic as best you can.

There we are, a glimpse at the kind of character you’ll be meeting in Nights of Villjamur and City of Ruin. 🙂

That brings to a close the round of character interviews, but the journey of discovery doesn’t end here – Nights of Villjamur is available in both paperback and hardcover, and Book Two in the Legends of the Red Sun series, City of Ruin, is also available. (order your copies through the appropriate links above) You can also order the audiobook, arriving in stock on the 29th of June (would love to hear this!)

Nights of Villjamur is also going to be invading the US soon – check out the book’s page over at Random House. 🙂

Book One of the Legends of the Red Sun – Nights of Villjamur (UK paperback edition):

Book One of the Legends of the Red Sun – Nights of Villjamur (US hardcover edition): 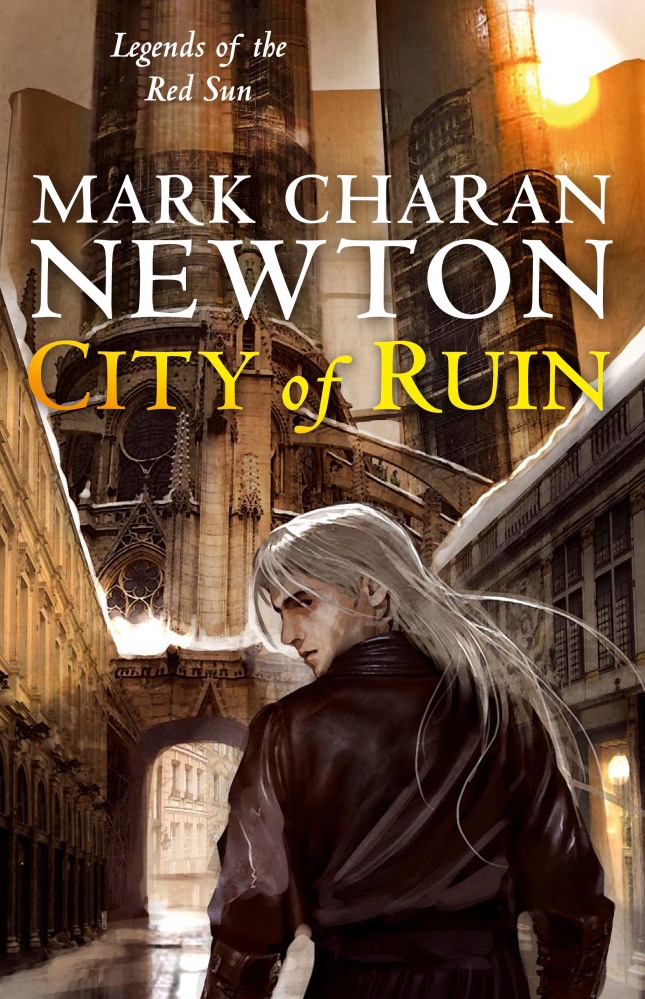