Released of note this month: Starfinder by John Marco

I promised John a shout-out for the mass-market paperback release of his latest novel, Starfinder, as soon as it was released in paperback, and here it is. 🙂 The novel is available here in the US and here in the UK; for those who want to get a copy of it in South Africa, be sure to get your closest Exclusive Books on the case! 🙂

For those who are wondering why I’m giving you links to but the novel, here’s my review: 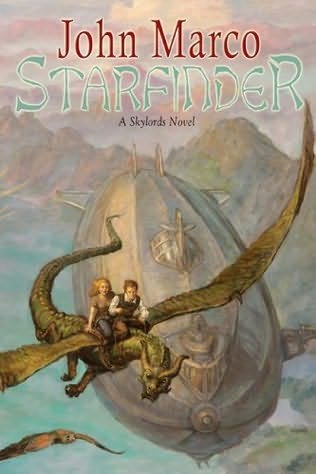 In the opening chapter of the book we meet Moth; he would like nothing better than to fly with the Skyknights in their mechanical dragonflies, soaring above Calio, the highest city in the world, but Moth is also an orphan, and those would would soar, at least in Calio, need the money and the connections to do so. Even though Moth has managed to find work at the aerodrome and has gotten to know some of the pilots, it seems his dream is out of reach…

Until, that is, Leroux, the old man Moth lives with, gives Moth a peculiar birthday present…

As a rule, I don’t really read YA novels; I’m so hooked on the Eriksons and Martins and Jordans of writing, those who write big, huge, massive bold stories, that I’m always scared that I’ll be disappointed, so I rather stay away; but when an author known for writing excellent Epic Fantasy ventures into YA, well, that piques my interest, and I’m glad to say that Starfinder did not disappoint me at all! 🙂

The one thing about YA is that it can’t be too complicated (and with that, I mean the kind of POV shuffling and plot-juggling Fantasy in general is known for) but it still has to be interesting enough, and find a balance for those important story-telling elements, so that the intended audience gets hooked – and I don’t just mean on the story or enjoy the characters, but so that they don’t stop reading later on in life. I mean, that’s the greatest gift a good author gives readers – the need to keep on reading, that drug of the imagination that makes us the best possible addict…

John knows how to do that. 🙂

Not only was the world John created in Starfinder beautiful and exotic, he takes you into that world in steps, layering the storytelling in such a way that what he reveals doesn’t bore you, and he drops enough hints to keep you curious. 🙂 John also plays with our expectations, giving us characters that seem, on the surface, to be exactly who they are, but then surprise us with who they really are! 🙂

The worldbuilding in Starfinder is sparse, with not a lot of detail gone into, but it works well – after all, if you travelled to a strange land for the first time, you wouldn’t be expected to find out everything about the place, would you? No, you would see only a portion of it; and besides, as the series progresses we will get more detail about the world beyond the Reach. 🙂

Character-wise, John has also created some memorable ones; Moth is the typical kid, with changing moods, more courage and fearlessness than adults remember themselves having at that age, and a keen sense of duty – it’ll be interesting to see how he develops in the sequel (which John is playing around with at the moment). Fiona was, I have to admit, a bit irritating, but she came into her own nicely toward the latter stages of the book.
I won’t reveal too much about the other characters, since I don’t want to really spoil anyone who will be reading Starfinder, but suffice it to say that you will be in for a treat, and the world and its characters will suck you right in. 🙂

I’m glad I took the time to read Starfinder, and will definitely be reading the sequel (no title yet, still too early for that) once its out! 🙂

For more info about John and his works, check out his website here and his blog here! 🙂 Starfinder is also available as an eBook here.

Posted by Dave de Burgh on April 7, 2010 in Announcements, Reviews

One response to “Released of note this month: Starfinder by John Marco”