Hey everyone, here’s the final part of the excerpts I received from Brian Libby’s Storm Approaching! Enjoy! 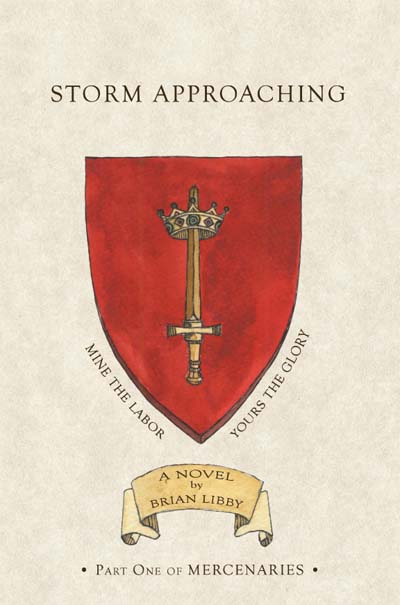 A continuation of Chapter 2 – Formation:

She bought some scrolls, and continued to read many others in the Institute’s library— tales of adventure, and legends, and history. (It was sometimes hard, even for the authors, to make clear the difference.) She found herself envying the people she read about who had been brave and daring, even though their lives had often been short. What was her future? She could not decide, especially after her adventure in Jagar’s Chapel. I almost died… I made a fortune… I was brave… I was stupid… I could do things… I was lucky… But her predominant feeling was that she had lived more in those few moments than in all her previous life and that she might go mad if she didn’t get out and do something. She was certainly not a future lace-maker. She did her best, but her best was merely adequate: her hands were too big for fine work.

Inspired by the tales she read, she bought a bow and practiced in the walled garden behind the main building. Awkward with a needle, she was more deft with arrows. Many of the girls chuckled. Jin at least did not laugh (much), and Nella would sit on the grass and watch her friend toiling away.

“What’s it for, Andi? Not many girls are mercenaries.”

Girls left the Institute by their nineteenth year. The great majority married more-or-less suitable young men (and some not so young) of the artisan or petty-burgher classes, men with whom the Institute thoughtfully made arrangements. Some chose to go to the Higher Schools, or to enter the Church or the Federated Society. A few, like Jin, chose other things. What about her?

At the beginning of her final year at the Institute Andiriel was chosen to be a prefect, one of the four girls to whom was entrusted the management of a wing in the residence hall. This honor surprised many girls. Apparently the matrons perceived qualities in her that her peers had not noticed. Others might have gotten a hint as to what those qualities were by paying attention to what Jin did after the prefects for the coming year were announced: she moved heaven and earth to transfer from Andiriel’s wing to one that would have a different prefect. (Nella, Andiriel’s roommate, stayed put.)

The ensuing year was one that the young women now under Andiriel’s supervision did not easily forget (although those who spoke of a “reign of terror” were surely exaggerating). She simply enforced all the rules. For example, girls were supposed to devote themselves to silent study in their rooms from 8:00 to 9:45 PM. This usually meant only relative quiet: less scurrying about, gossip, and general malingering than usual. But in North Wing during these hours each girl was at her desk and the silence of a tomb prevailed. Regulations said that girls were to have their beds neatly made and their trash emptied before breakfast. Not everyone took this literally, except in North Wing: Andiriel inspected the rooms while the others were eating, and woe betide the inhabitants of messy ones. In her first week as prefect she assigned twenty hours of detention, six of cleaning, and four of kitchen work. In a couple of extreme cases she closeted herself with offenders for “a few words.” What those words were no one knew, but they were apparently very well-chosen, for repeat offenses were rare.

There was also the strange case of Myria, a fifteen-year-old whose marks and conduct were so atrocious that rumor said she was to be dismissed. The Chief Matron moved her to Andiriel’s wing, where a miracle took place: Myria received second-level honors for the quarter and had only three demerits.

At the end of that quarter four girls urgently requested transfers to other wings and eleven requested transfers in. It was all very mysterious, but the matrons left well enough alone. They didn’t quibble with success. Mistress Perra, housemother of North Wing, told the Chief Matron that Andiriel was the best thing that had ever happened to her, for her own supervisory work was largely eliminated. Perra had never seen such intelligent application of energy in the service of scholarship and order.

Three months into the Andiriel regime North Wing posted the second-highest average in the history of the Institute and won the netball tournament. The next Saturday night Andiriel, Nella, and Jin brought back from town a cartload of food, including three gallons of root-tea, and North Wing had a party (for which Andiriel footed the bill). Even those girls who had muttered curses behind their prefect’s back admitted there were some advantages to the system.

But even prefects make mistakes.

There we go, the first two chapters of Storm Approaching! You’ve met Andiriel, the character that will take you through the book, but there’s wayyy more waiting in the wings, including mercenaries, a clever fox, the politics and counter-politics of Empires, and plenty of intrigue. 🙂

You can order your copies of Storm Approaching from the publisher, Author House, or from Amazon (US/UK). South Africans reading this can also order the book from Kalahari and Exclusive Books.

And for more info on Brian and his work, you can check out his blog and website. 🙂

Posted by Dave de Burgh on February 5, 2010 in Uncategorized