Hey everyone! 🙂 I’m back, after some trouble with the internet; seems that my service provider thought that it was high-time to ‘reset the ports’… what ever that means. Suffice it to say that I couldn’t do a damn thing, but it’s all working again now. 🙂

Anyway, let’s get into the review!

Abyss is the third book in the 9-Book Fate of the Jedi series, and the first book of the series by Troy Denning. The main plots that unfurl in this book are Luke and Ben Skywalker’s time in the Maw, the discoveries of Vestara Khai and her fellow Lost Tribe-Sith, and the continuing battle of wills between the Jedi and Chief of State of the Galactic Alliance, Daala.

If you haven’t yet read Book 1, Outcast (audio book reviewed here) and Book 2 (Omen, reviewed here), then don’t pick up Abyss. You wont know what’s going on, who’s who (especially the new characters such as Vestara) and you’ll end up feeling a bit bewildered. In fact, if you haven’t read at least the Legacy of the Force series, don’t read Fate of the Jedi; there’s just too much that has happened in the Expanded Universe that you missed, and that you need to know about in order to understand the character’s motivations in this series.

Abyss was, while not remotely the best work that Troy has done, both better than Outcast & Omen, and at the same time, not as good.

You see, Outcast set the tone for the series, introducing some of the major plot lines, and Omen introduced yet another plot line (that of John Jackson Miller’s Lost Tribe of the Sith); Abyss changes the game up a bit, bringing in a new character, but not much else changes – on Coruscant, the Jedi are still floundering their way through Daala’s unwholesome attentions, and the Jedi Knights are now dropping like flies (not dying, going insane), while Luke and Ben begin to take a closer look at the Maw, the roiling mass of black holes close to Kessel, because of a discovery made in their time with the Aing-Tee monks. It’s more of the same, in my opinion, and the new storyline-additions don’t offer much in the way of variety or newness.

Is this a case of being careful with the story, and not throwing in too much, or a case of being too careful, and taking too long to move tha tale forward? Only hindsight will tell.

I am, I’ll admit, curious about the direction that Fate of the Jedi is taking – the Jedi are really being shaken up and rattled around, and I can’t see the Order regaining their balance and status any time soon, if at all, after this series. If the Order did somehow manage to come back from the anger and distrust facing it now, it would have to be something incredible. I’m also intrigued about what is being discovered about Jacen Solo / Darth Caedus by Luke and Ben Skywalker; on the one hand, it seems that Jacen / Caedus just didn’t really use what he learned to do on his 5 year journey (during the Legacy of the Force series), and on the other hand, we are being shown a side of Jacen that paints him, and this is weird, as a better person and Jedi than Luke Skywalker. There’s just something about the way Jacen is remembered in Abyss by the various characters that Luke and Ben meet that doesn’t gel properly – sure, I know that he only embraced the name Caedus after murdering Mara Jade Skywalker, but it just seems that something else, other than Verger and Lumiya, happened to Jacen.

The case being made at the moment suggests that Jacen was preparing for a threat that Luke and Ben are only now discovering – and this, unfortunately, just doesn’t gel for me. The reason that Jacen become Caedus was to attain and use power so that he could bring peace to the galaxy; so far in Fate of the Jedi, it seems that Jacen discovered an actual, looming threat which has nothing to do with governments pulling out of the GA (in Legacy of the Force).

Anyway, I hope these weird inconsistencies are addressed in the next couple of books. 🙂

But how was the book itself?! I hear you asking. 🙂 Well, anyone who’s read Troy Denning’s work knows that the man writes a tight, pacey, thrilling tale, that his work is filled with excellent lightsaber battles as well as important philosophical ponderings, and that the man really loves Star Wars. Nothing has changed! 🙂

Troy pushes many of the characters to their limits, throws some great action set pieces our way, and takes us a bit deeper into the politics, scheming, and increases the stakes by showing us how the events taking place around the Jedi are leaving them more frantic and reactionary that they’ve ever been – after Order 66, there wasn’t an Order left, and the Order was way more capable during the Yuuzhan Vong invasion that what it seems to be now.

Troy also has some major surprises in store (in the Luke-Ben storyline) that might bring a tear to your eye (and plenty of goose flesh). 🙂

All in all, while I enjoyed Abyss and am still intrigued by Fate of the Jedi, it seems that the story hasn’t yet completely found its feet; it’s not something you can really blame on Troy or Aaron or Chistie (considering how such a series is put together in the first place), but it does have me concerned. I wouldn’t want to see the madness plaguing the Jedi or the information revealed about Jacen’s journey become a plot point that is readily cast aside – as happened with the Second Galactic Civil War in Legacy of the Force.

I’ll definitely be reading the next book in the series, Aaron Allston’s Backlash (a nicely ominous title) as soon as I can (yes I know, still have to wait for it to be published), and hoping that things pick up momentum – going from the blurb I’ve read for Backlash, it seems that we won’t be disappointed. 🙂 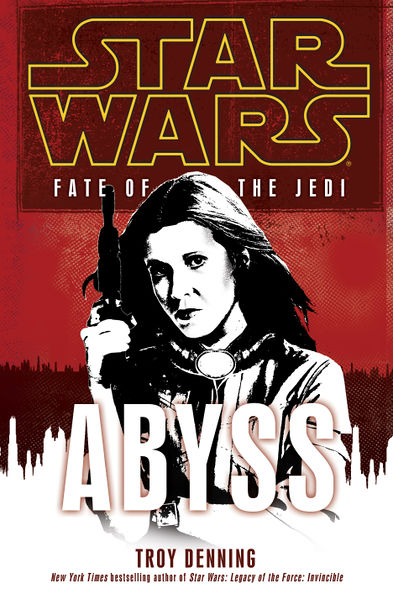 3 responses to “Review: Star Wars Fate of the Jedi – Abyss by Troy Denning”