RSS
← Angry Robot: The Day of the 3-Author Madness!
Robot Army Website of the Month! →

An Interview with Shane Briant

You all know how much I enjoyed Shane’s excellent thriller, Worst Nightmares! 🙂 So, thanks to Shane and Imran (the reason I got the book in the first place) I now have an interview with Shane for you! 🙂 Enjoy!

First of all, would you please tell us a bit about yourself and what led you to choosing writing and story-telling as a career?

I’d been a film actor since leaving Law School in Dublin in 1971. I’d taken part in a play, which was the hit of the Dublin Theatre Festival and transferred to the West End. I was nominated for the London Theatre Critic’s Best Newcomer Award. After that I started in on movies and never looked back. My father was novelist and biographer Keith Briant, so writing was probably always in my genes. In 1994 I started in on my first novel while touring Europe with a television series. I never looked back.

Worst Nightmares – how did the idea come to you?

It occurred to me one day how we’ve become accustomed to dealing with the Internet in such a cavalier fashion. There are clearly people ‘out there’ hoping to harm us in some way; either to steal our identity, bank balances, our love and affection — our lives! Yet we deal with them without caution, revealing aspects of ourselves we wouldn’t do face to face. We reveal intimate secrets with our doctor but not at the dinner table – so why do we do so on the Internet. Hence the idea of an Internet psychiatrist – someone who wants only to track you down and kill you?

In Dermot Nolan, you’ve created a character that’s successful and well-loved, and you’ve also given readers an insiders view into certain aspects of the publishing industry – were Dermot and the story’s setting there from the beginning, or were there some changes that had to be made?

They were there from the beginning. In some aspects there’s a lot of autobiographical material there. But what I found interesting was to think “how far would I go personally to create a huge career for myself if I had writer’s block? What would the average man or woman do to achieve success?”

The thriller genre continues to evolve – what, in your opinion, makes thrillers so addictive and violence so commercial? Is the world a bit nuts? 🙂

I find thrillers addictive because they are purely escapist and take me places I’ve never been and show me people I never met before. This is in sharp contrast to reality, where I have to watch or read about what actually happened – man’s inhumanity to man; something I find deeply disturbing on a daily basis.

How did you go about balancing the tension within the unfolding tale while also keeping the characters engaging?

This seems to come naturally once I have established who the characters are and what makes them tick. If you read a book and bond with a character initially, you are more likely to understand and forgive his/her moral transgressions when they occur. That way you are on their side regardless of their transgressions (within limits, of course!)

Did you do any research before or during the writing of the novel, and did the research end up changing any aspects, such as events or characters?

Research is everything! I hate it when people tell me things that aren’t true, such as a supermarket in Paris being open at ten in the morning when I know it opens at midday. Silly things, but they make you lose belief. So all the most interesting aspects, such as gun calibres, how long before flies inhabit a dead body, etc are important. Vital!

In Worst Nightmares, one of the themes you deal with is the theft of intellectual property – did you want to explore that theme from the beginning or did it grow out of telling the tale?

This was merely the device that led to the discussion of what people will do for money and success. It could have been anything. Stealing is stealing; a lover, money, intellectual property – you name it.

In this age of You Tube and blogs, how important is non-publisher marketing, and do you see the publishing industry having to evolve to incorporate these mediums in their efforts to reach a wider audience?

Yes, absolutely. I believe the Internet is paramount. One strong video on YouTube that’s passed from one person to another can receive a million hits in a week. How many people look at an advertisement in a national newspaper and buy a book based on it? Very few. Cyber space is a huge marketing tool now. And it provides me as an author with a direct line to my readers – which I love.

How is work progressing on the sequel to Worst Nightmares, and can you whet out appetites with some info about the book? Same characters, etc? 🙂

The sequel is already written and in the editing process. I found it HUGELY enjoyable to write and went that extra mile into the darkness. It was great fun (because it is fiction!) I could be really inventive and very cruel yet maintain some humour within the writing.) It was a blast. It takes over directly from the last page of Worst Nightmares and takes us on another horror ride of mayhem from Los Angeles to Paris and back.

Finally, any advice for budding writers out there? Any important points to keep in mind while writing or building a tale?

Try to have an original concept. By that I don’t mean the basis (mine was the theft of intellectual property – something that’s been done a thousand times.) It’s the ride you take the reader on that’s important. Keep up the pace. MAKE the reader turn that page, and then REALLY surprise him.

Thanks for taking the time to answer these questions! 🙂 We all wish you nothing but continued success and many more nail-biting thrillers on our shelves!

Many thanks for showing such interest in my book. I’m really pleased you liked it! 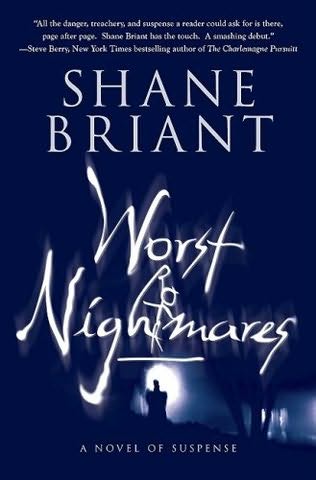 Many thanks to Shane for answering these questions and to Imran for getting the ball rolling and my foot in the door. 🙂 I’m sure we’ll be hearing much, much more from Shane Briant in the future and I can assure you, I’m looking forward to the sequel to Worst Nightmares with great anticipation! 🙂 It’ll definitely be one of my must-reads as soon as its available!

And for those who want to order the book (it’s an excellent book! Read my review here), here are the links:
UK & US. No info yet on availability in South Africa, but since the book is available, get onto your closest Exclusive Books branch and get them to order it for you! 🙂

This novel is published by Vanguard Press.

← Angry Robot: The Day of the 3-Author Madness!
Robot Army Website of the Month! →

3 responses to “An Interview with Shane Briant”