Matthew Swift died two years ago, attacked by a hungry creature of shadow. But only his blood remained – his body was never found. A service was held with an empty casket, and those who had known him moved on with their lives. London moved on.

There we go, my own summary of the book. 🙂 Sound interesting? Well, it is, believe me! It took me around two months to get to this book (the life of a reviewer is filled with books, I love it!), and when I started, I was reading two other books at the time – The Modern World and Dawnthief, and then, just for the hell of it, I squeezed in a Star Wars novel, too- so I would read about three or four chapters at a time, rotating books as I went. Out of necessity, you understand. 🙂 But every time I picked up A Madness of Angels again, and as I was pulled deeper in this alternate, terrifying and beguiling London that Kate Griffin had created, it was an absolute chore to have to put it down.

Remember Stephen King’s The Tommyknockers film adaptation? Remember Bobbie’s thought-reading typewriter? Bobbie wouldn’t even have to sit down and write – the machine she had built tapped into her thoughts, and would type and type and type while she did whatever she wanted. I’ve got a sneaky suspicion Kate’s got the typewriter in her study. 🙂 I can see her walking the streets of London, just experiencing it, and the typewriter at home taps out everything, filling pages and pages and pages while Matthew does his thing in her head. Why? Because this is one of those not-normal books. There is no clear structure to the prose, not formula followed. Kate pulls you in by your eyes and throws you into what seems like an ocean of description, and you’re swimming through sights, sounds and scents. I’ve never been to London (my only trip out of South Africa so far has been a trip to visit my parents in Perth), but damnit, it felt like I was there, reading this book! I felt the street under my shoes, watched the shadows moving (and became gradually more terrified of them, and of my own), smelled the stink of garbage and exhaust fumes and cigarette smoke and fish-and-chips and the scent of the Thames over everything; I saw the lonely lamp-posts, the huddled buildings, the crawling black beetle-like taxis, the throngs of people. Reading this book really does take you there, to the heart of London, and I’m so glad that I got to read this book before ever seeing London for myself, because when I do eventually get there, I’ll be looking underneath the surface, trying to find the Kate Griffin’s London, trying to find the magic and the electric blue angels. She is that damn good! 🙂

And I wouldn’t mind ol’ Matthew as a tour guide; and bugger the taxis, we’d use the bikers. 🙂

I’m not going to spoil Matthew for you – let’s just say that he may be suffering from a bad case of grammar-confusion. 😉 The poor man isn’t sure how to refer to himself half the time! 🙂 But it works, and Kate handles the transitions beautifully. She knew exactly when and because of what Matthew would… well, 🙂 read and find out, and does a stellar job of building tension and mystery with it throughout the book. When the time comes to reveal the truth about Matthew, you also realize that you actually knew all along, that the clues were there for all to see – but Kate distracts you with beautiful prose, making your head swim with every sense we take for granted in our lives. Through Matthew, you may just learn to really notice that strange smell, or really listen to that out-of-place sound, or really look at your surroundings. I truly to believe that the world hides plenty from us, and all we need to do is really open ourselves to it to see and hear and taste and touch and smell.

The other characters are also really cool, especially Charlie of the whiskers, Oda of the guns, and even ol’ Mr Bakker. They all, and many more besides, bring a richness and a variety to the tale that make you feel as if you’ve been partaking in a banquet of exquisite different tastes that, push away even the thought of a full stomach!

But, I have to be honest here, the real stars of the tale…? The urban magic of London. I defy you to walk through London and not try to find the magic, or to let it find you. Kate pulls off what very, very few novelists do, these days – you actually end up thinking Maybe there really is magic out there. Maybe I can really pull heat from the electricity feeding my PC or laptop, maybe I can have a chat with those who travel the Last Train or see through the eyes of rats and pigeons. Kate leaves you with the belief that magic exists, and that you only need to acknowledge that it does for it to reveal itself to you. And then I’m not even talking about the creatures that stalk Matthew Swift, or the dragon- Oops, I’ll let you discover them for yourself! 🙂

All in all, this was a book that I hoped wouldn’t end. I wanted to submerge myself completely and continuously in the unseen London of Matthew Swift. I wanted more and more magic to be revealed, wanted to meet more of the magicians and sorcerers and everyone else inhabiting that unseen London, but I was still left satisfied and thrilled and, above all, hopeful, at the end of the tale. I want to follow Matthew down again, into his London, because maybe, just maybe, his London is the same as the London you all (who have been there) know, and our the eyes of our mind need to open just a bit more to see it and take it in. 🙂

If Stephen King and Clive Barker ever collaborate on a project, and bring to bear their own unique tastes and talents, A Madness of Angels would be the result – they would see things in London that no-one else had ever imagined… no-one except, perhaps, Kate Griffin. 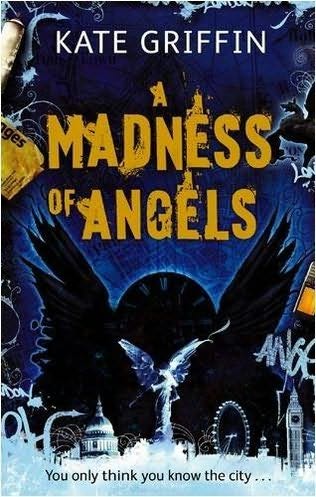 A Madness of Angels

5 responses to “Review: A Madness of Angels – Kate Griffin”