I finished this book about two weeks ago, and I’m only posting the review now because I wanted to finish the other two books I was reading, too, and then do the reviews one after another. The reason for this is simple: I couldn’t put them down! 🙂 Okay, I did put them down, alternating between each book; I read a hundred pages of each book before moving onto the next, so that’s why it took me just more than three weeks to finish three books. 🙂

Okay, time for the review: First off, Street of Shadows didn’t catch my attention the way the first book in the series did. One of the reviewers over at TheForce.Net said that the book was a bit lacking in the ‘noir’ department, but that didn’t matter to me, because I’ve never actually read any ‘noir’ so I have no way of making a judgement because of that. This book seemed to me as if a collective breath had been taken, as if the characters were taking stock of themselves and their situations before the final act.

In this book, Jax Pavan has changed professions: he’s no longer a bounty hunter, but a private eye, and with the help of I-5, Den Dhur, the Jedi Paladin Laranth, and the one-time servant of Darth Vader, they take on the investigation of a famed Camaasi artist, Ves Volette. The first thing I enjoyed was the fact that we get a new (almost current) report of the destruction of Camaas (an event, for those who know their Star Wars, which Timothy Zahn created in his Hand of Thrawn Duology), and we also see Camaas through the memories of Volette, which was cool; it was nice to be able to actually see the planet, and the glimpses we get of daily life there, as well as the landscape, serve to flesh out a location that no-one writing for Star Wars has ever taken us to before.

As a PI, Jax sucks. (Sorry Michael) At first I thought, okay, a Jedi as a PI would be unstoppable; I mean, he has the Force on his side, and with the reflexes and insight the Force allows, he would have been able to close any case very quickly indeed. But he struggles along, and we are taken through leads that seem to be there only for the value of being shown some interesting new sentient species and a pretty cool duel with a Cathar. Those were the highlights connected to Jax, for me. 🙂

But we also have other arcs to follow: the first being Aura Sing, the other being Captain Typho.

Aura was written very well! The last Time I saw her was in one of the Legacy of the Force novels, and I’m glad that such a tight reign was kept on her character. Aura kicks ass and is irredemably evil, and the vocal (and physical) play between herself and Vader is quite entertaining, especially because something happens in this book that took me completely by surprise: I won’t tell you what it is, it’s something Vader does, but I’ll leave it up to you to decide whether you think it fits or makes sense. I enjoyed it. 🙂

Typho, as a character, has always been pretty flat (not even George Lucas could fix that), but Michael Reeves makes him interesting, and when Typho is chatting with an Imperial (you’ll know where as soon as you get to it) the insults traded there are some of the best that have graced the pages of any Star Wars novel. 🙂 Anyway, Typho is looking for Padmè’s murderer, and he was in love with her, so this is a mission of vengeance for him.

One thing that I was very pleased with is that I-5 and Jax are friends, and Jax’s hang-ups with droids are almost completely gone. Michael also goes deeper into the issue, and so we understand why Jax felt the way he did with droids, which helps us identify even more with Jax and I-5. 🙂 The other characters don’t have much of a role to play (except for the Paladin, Laranth, but that you’ll have to discover for yourself), but we do get two more connections going back to earlier Reeves Star Wars novels, and I have to say, I love the way that Reeves and Perry do this. Okay, every Star Wars novel does this, but these guys play with our expectations: you read something in one novel that, it seems, we won’t ever see again, or that has no further use, but we are proved pleasantly wrong. 🙂

All in all, this was an enjoyable book, not as great as the first book, but a worthy addition. 🙂 There are duels, explosions, the use of the Dark Side, and humor, so any Star Wars fan should enjoy this book. 🙂 If you’re not a Star Wars fan, then don’t even ask me if it would be a good idea to read this book; I’ve been reading Star Wars too long and according to the timeline and events to give you an unbiased opinion, but please, drop me a line if you want to to start reading Star Wars but don’t know where to start. 🙂

And as always, here’s the link to Michael’s website. 🙂 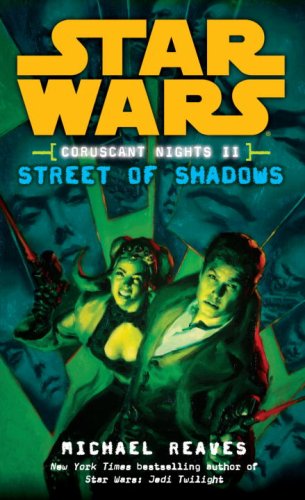 Posted by Dave de Burgh on November 1, 2008 in Reviews